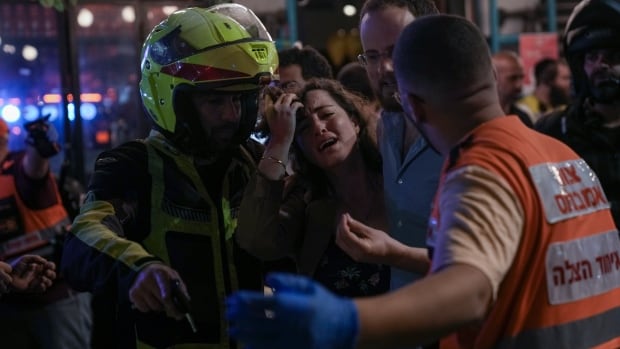 Police said there were “indications” it was a terror attack – the fourth deadly attack in Israel in less than three weeks at a time of heightened Israeli-Palestinian tensions.

The Hamas militant group that rules the Gaza Strip welcomed the attack but did not claim responsibility.

A few hours after the shooting, the alleged attacker is still at large. Hundreds of Israeli police, canine units and army special forces were conducting a massive search in central Tel Aviv, going building by building through densely populated residential neighborhoods.

Amichai Eshed, the Tel Aviv police commander, said the gunman opened fire in a crowded bar around 9 p.m. and then fled.

“Our working assumption is that he is still around,” he told reporters.

“At the moment there are indications that this is a terrorist attack, but I have to be very delicate about this and say that we are also checking other leads.”

Israel’s Magen David Adom emergency service said it received reports of a shooting at “several scenes” around downtown Tel Aviv. He said two men in their 30s were killed. Seven other people were injured, three of them seriously, he added.

At least one shooting took place on Dizengoff Street, a central thoroughfare. Dizengoff Street has been the site of several deadly attacks over the years. More recently, an Arab citizen of Israel shot and killed two Israelis and injured several others in the street in January 2016.

The popular nightlife district was jam-packed Thursday night, at the start of the Israeli weekend.

Prime Minister Naftali Bennett was monitoring the situation from Israeli army headquarters, which is also in downtown Tel Aviv, his office said.

Tensions have been high after a series of attacks by Palestinian assailants killed 11 people just before the Islamic holy month of Ramadan, which began nearly a week ago. Last year, protests and clashes in Jerusalem during Ramadan sparked an 11-day war in Gaza.

Israeli, Jordanian and Palestinian leaders have held a series of meetings in recent weeks, and Israel has taken a number of steps aimed at easing tensions, including issuing thousands of additional work permits to Palestinians in the ruled Gaza Strip. by Hamas.

Before the attack, Israel said it would allow women, children and men over the age of 40 from the occupied West Bank to pray at Al-Aqsa Mosque in East Jerusalem on Friday, the first weekly prayers of Ramadan. Tens of thousands of people were expected.

The mosque is the third holiest site in Islam and sits on a hill that is the holiest site to Jews, who call it the Temple Mount. The holy site has long been a hotbed of Israeli-Palestinian violence.

Israel has sought to sideline the Palestinian issue in recent years, focusing instead on forming alliances with Arab states against Iran. But the century-old conflict remains as insoluble as ever.

Hamas spokesman Abdelatif Al-Qanou said Thursday evening that “the heroic attack at the heart of the (Israeli) entity struck the Zionist security system and proved our people’s ability to harm the occupation”.

On March 29, a 27-year-old Palestinian from the West Bank methodically gunned down residents of the central city of Bnei Brak, killing five people. Two days earlier, a shootout by two Islamic State sympathizers in the central town of Hadera killed two policemen.

The previous week, an IS sympathizer had killed four people in a car-ramming and stabbing attack in the southern city of Beersheba. The attacks in Hadera and Beer Sheva were perpetrated by Palestinian citizens of Israel.

Recent attacks appear to have been perpetrated by lone assailants, possibly with the help of accomplices. No Palestinian militant group claimed responsibility for them, although Hamas welcomed the attacks.

Israel says the conflict stems from the Palestinians’ refusal to accept its existence as a Jewish state and attributes the attacks in part to incitement on social media. Palestinians say such attacks are the inevitable result of a nearly 55-year military occupation that shows no sign of ending.