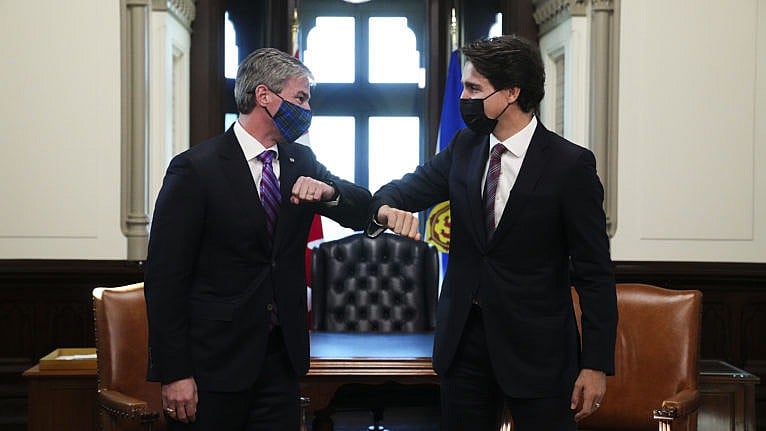 Philippe J. Fournier: New survey of federal-provincial attitudes suggests that even in Quebec and Alberta, regional resentment is not on the rise

From a strictly political perspective, the pandemic may have served as a political stress test for provincial-federal relations in Canada. Over the past year and a half, we have witnessed a number of bumps in the road between the provinces and the federal government. To name just a few from a comprehensive list relating to the pandemic: While health care falls under provincial jurisdiction, it was the federal government that negotiated with the pharmaceutical giants for the procurement (and distribution ) vaccines, and while the provinces are responsible for care, the federal Liberals campaigned for the implementation of national standards last fall. This is the policy in a decentralized federation like Canada.

Just before the holiday break, the Vancouver-based polling firm Research Co. took the pulse Canadians on their satisfaction with provincial and federal leaders, as well as an interesting measure of provincial resentment across the country.

Let’s start with the Prime Minister. When asked: â€œMy province would be better off with another premier in Ottawa,â€ half of survey respondents (49%) agreed, while 36% disagreed. Unsurprisingly, majorities in the western provinces agreed that a change to the PMO would be beneficial to their respective provinces. It was only in Quebec and Atlantic Canada that a greater number of respondents disagreed (and barely).

Let us now look at the numbers for prime ministers. To the statement: “My province would be better off with another responsible prime minister”, the results show that half of the respondents (51%) agreed and a third did not agree. Majorities in the Conservative-led provinces of Ontario and across the Prairies believe their provinces would benefit from a change of premier, the highest proportion of 73% in Alberta. Only 17 percent of respondents in Alberta disagreed.

Even the premier of Quebec, FranÃ§ois Legault, scored lower than other recent polls on provincial satisfaction: 48 percent of Quebecers agree that Quebec would be better off with a change of premier. Given that this Research Co. poll was on the ground in mid-December, just as COVID-19 infections and hospitalizations had a strong upward trend, it is not unlikely that the pandemic has started to weigh down. on Legault’s stellar popularity over the past three years. year. Two weeks before, the last LÃ©ger tracker had measured a 70 percent approval rating for Legault’s handling of the pandemic.

As for BC Premier John Horgan, he is once again one of the country’s most beloved premiers. Only 35 percent of respondents in British Columbia agreed that a change would be beneficial, while almost half (47 percent) disagreed.

Finally, one question in particular caught my attention in this Research Co. survey: â€œAgree or disagree? My province would be better off like its own country. Across Canada, 25 percent of respondents agreed, while 65 percent disagreed. Breaking down the results by region of the country, we find that the proportion of respondents who believe their province would be better off as a country increases to 38 percent in Alberta and 30 percent in Quebec (see full tables here).

Of course, care should be taken with regional sub-samples, as their uncertainty is higher than with the full sample. However, it should be noted that nearly a third of Quebec respondents believe that the province would fare better as a separate country, which corresponds to the recent figures on Quebec sovereignty (since Quebec sovereignty has not been talked about much in recent years, polls on the subject have been less frequent).

Nonetheless, if we delve into the Quebec results in more detail, we find that only 16 percent of Quebec respondents “strongly agree” with this statement, with another 14 percent saying “moderately agree. “.

This data should help silence lingering rumors online that FranÃ§ois Legault is secretly preparing a third referendum on Quebec independence. Although polls have shown Legault to be perhaps the most beloved premier of recent decades in Quebec, his popularity and nationalist attitude have not translated into additional support for sovereignty.

As for Alberta, 16 percent of respondents â€œstrongly agreeâ€ that the province would do on its own, while 22% â€œmoderately agreeâ€. According to Mario Canseco, CEO of Research Co.: â€œSeparatist sentiment in Alberta is currently close to the levels seen in December 2019 (40%)â€.

Resentment towards Ottawa has undoubtedly grown in Alberta since Trudeau and the Liberals took power in 2015. However, let us remember that the pro-Western Maverick Independence Party won a paltry 1 percent of Alberta’s vote. in the federal election last fall, while at the provincial level Wildrose’s Independence Day polled between 5% and 15% for most of 2021 (WIP’s best poll was 20 percent of province-wide voting intentions, as measured by an Angus Reid poll in June 2021).

Regional resentment and separatism will always be one to watch out for in this country, such is the reality of living in a large, diverse and multinational state. Interestingly, however, the data available so far shows that the pandemic has not significantly moved the needle of these resentments.

Escaping COVID-19 on the trails: How this Corner Brook ski club is regaining a sense of normalcy