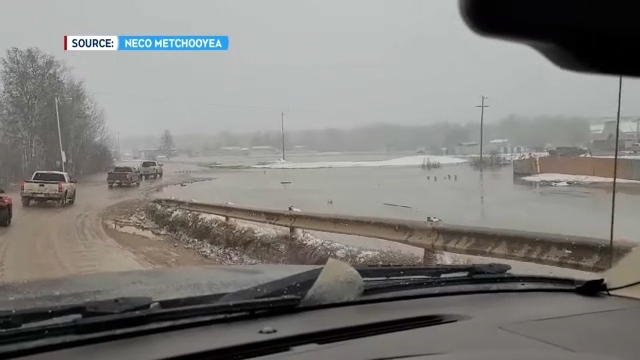 Northern Alberta communities are experiencing spring flooding and experts say Alberta needs to do more to prepare for flooding in the future.

The Paddle Prairie Métis Settlement, home to around 800 people, has faced massive flooding in recent weeks and many homes had no running water.

Ryan Ness, director of adaptation at the Canadian Climate Institute, said extreme weather and flooding will become more frequent in the future and damages can range from $1 billion a year currently to more than $10 billion per year by the end of the century, depending on the extent of climate change observed in Canada.

To deal with flooding at Canada’s doorstep, Ness said approaches to managing flood risk across the country were inconsistent.

“We don’t have standard data available for the whole country on what and where there is a risk of flooding,” Ness said.

Maps of floods in the country only cover half of the properties and assets, and these maps are on average more than 20 years old.

“We don’t even have a starting point to manage our flood risk and prepare for the impacts of climate change,” Ness said.

Alberta has faced several major weather events that have caused significant damage in recent years, with five of the 10 costliest disasters occurring in Alberta, including the 2013 southern Alberta floods and the Fort McMurray in 2020.

Experts say these events will occur more frequently as the climate changes.

“We’ll see big floods happening more often and it’s possible that the biggest floods will be bigger than they have been in the past,” Ness said.

“As the climate warms, there is more energy to create storms and more water in the atmosphere to fall.”

These major events will have significant impacts on infrastructure across the country.

Public infrastructure such as roads, telecommunications systems and water treatment plants are all at risk of inland or coastal flooding, and Ness said this can be critical when these services are shut down.

Property is also at risk, Ness said, with some estimates putting 10% of Canada’s real estate at risk of flooding during a 100-year flood.

Many communities don’t start looking at their flood risk until a flood has already happened and residents want to prevent it from happening again, Ness said.

All cities built along a river and in a floodplain are at risk, such as Calgary, Winnipeg and Ottawa, Ness said.

Flood mapping and planning from province to province varies wildly and is often downloaded to municipalities, Ness said, leaving the country with a patchwork approach.

Paul McLauchlin, chair of Rural Municipalities of Alberta, said small communities in the province are advocating for support for climate change resilience. McLauchlin said communities want to make sure they aren’t completely isolated if their only bridge in and out of town is washed away by flooding.

Being resilient to flooding and other climate issues is a big deal for small communities, McLauchlin said.

“It’s a discussion we should all be having now before this happens,” McLauchlin said.

“I think we need to work with the provincial and federal governments to have that discussion and to make sure those plans are in place,” McLauchlin said.

According to the Canadian Climate Institute’s Underwater report, released last year, Alberta, Quebec and Ontario will bear the largest overall costs of climate change damage to their roads because these are the regions with the most extensive road networks. By mid-century, climate change-induced damage will cost these provinces hundreds of millions of additional dollars to maintain their road networks, under the low-emissions scenario, the report said.

Rail lines will also be impacted by climate change, with damage estimated between $1 million and $180 million per year depending on the timing and emissions scenario, according to the report.

To bring infrastructure across the country up to a standard to be more resilient to climate disasters, such as flooding, the report’s estimates say it could cost the country $250 billion.

McLauchlin said designing infrastructure to withstand major events is important to mitigating some of the damage from future major weather disasters.

“Resilience is a huge debate for all Albertans… 1/8 We need to be 3/8 in making sure we have these resilient communities, making sure we know who is at risk and who isn’t not, and see if we can design infrastructure and mitigate now before there are terrible disasters.