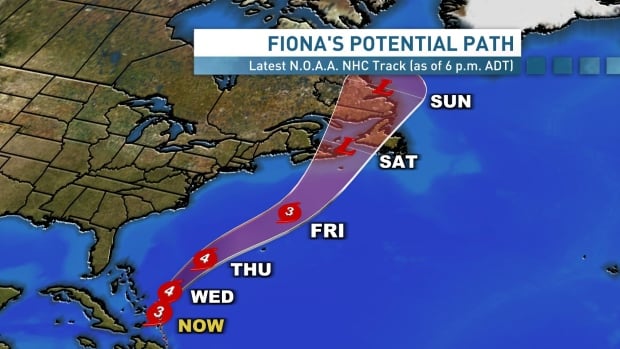 The Atlantic provinces could be hit hard this weekend by Fiona, which is currently a Category 3 hurricane.

Although it’s too early to tell how severe the storm will be when it arrives, CBC meteorologist Jay Scotland said now is the time to start preparing.

“It’s still far too early to predict potential rainfall, surge heights or wind peaks,” he said. “These impacts will be highly track dependent.

“That being said, with this storm that could arrive as a hurricane, [Prince Edward] Islanders should be prepared for an extended period of heavy rain and tropical storm force winds. »

As things stand, the eye of the hurricane is expected to enter Canadian waters early Saturday morning AT and pass the eastern tip of Cape Breton around noon.

“With trees still in full leaf, [we] must also be prepared for power outages. Finally, coastal and inland flooding are possible due to heavy rains, high water levels and breaking waves.”

The powerful hurricane has already caused extensive damage in the Dominican Republic and Puerto Rico.

The National Hurricane Center expects Fiona to pass through Bermuda on Thursday afternoon before moving into Canadian waters on Friday.

The center’s forecast at 6 p.m. AT on Tuesday noted that the storm was over parts of the Turks and Caicos Islands and the southeastern Bahamas, and warned: “Strengthening is expected over the next two days.”