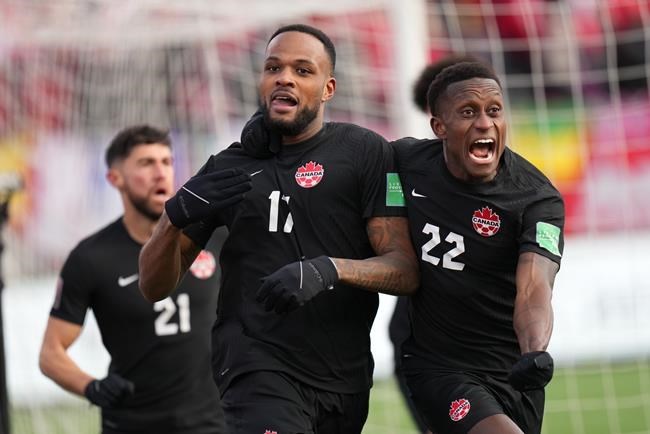 HAMILTON — Cyle Larin blasted his way into the record books and Canada continued their march to Qatar 2022 with a 2-0 win over the United States in CONCACAF World Cup qualifying on Sunday.

HAMILTON — Cyle Larin blasted his way into the record books and Canada continued their march to Qatar 2022 with a 2-0 win over the United States in CONCACAF World Cup qualifying on Sunday.

The 40th-ranked Canadians went ahead early with a timely goal through Larin, then held on, bending but not breaking as the 11th-ranked Americans – who had more ball – probed the local defense without success.

It was a question of Canada ending its chance and the Americans unable to seize theirs. It still made for a tense final as the USA went on for five minutes of extra time.

Sam Adekugbe added the insurance goal in the 95th minute, on a solo run after the Americans got caught deep on the Canadian side. It was his first goal in 26 international caps.

Canada (6-0-4, 22 points) remain atop the eight-team standings in the final CONCACAF qualifying round while closing in on Qatar 2022. USA (5-2-3, 18 points) lost ground and faced losing second place in the table to Mexico pending further results.

The match at Tim Hortons Field was Canada’s 16th in World Cup qualifying since last March, as John Herdman’s side improved to 12-0-4 while claiming a fifth consecutive win.

Canada took the lead after just seven minutes when a Matt Turner goal kick hung in the wind. Kamal Miller headed for the ball towards Jonathan Osorio, who sent it to Larin. The Besiktas striker played back and forth with Jonathan David and beat Turner with a right-footed shot as the defenders struggled to catch him.

It was Larin’s record 23rd goal for Canada in his 46th appearance, moving him past Dwayne De Rosario to top the men’s goalscoring list. Canadian Christine Sinclair is the world’s all-time leading scorer with 188 goals.

It was also the kind of quick-fire goal the Canadian men, always dangerous in transition with their speed and finishing ability, have become known for.

The Canadians were coming off a 2-0 victory Thursday in Honduras, their first victory there since 1985, while the Americans beat El Salvador 1-0 in Columbus.

Canada now flies south to wrap up the international window against El Salvador in San Salvador on Wednesday as the Americans host Honduras in St. Paul, Minnesota.

The Canadian men will have three games remaining. In March, the top three teams will book their ticket to Qatar 2022 while the fourth team will take on a country from Oceania to see who will join them to represent North and Central America and the Caribbean.

The match sold out within hours and Canada Soccer was expecting a crowd of 24,000. But tougher pandemic-related restrictions limited crowds to 12,000, after the first ticket sale was canceled and a smaller second held.

Despite these limitations, there was plenty of atmosphere. The Canadian bus arrived at the stadium on Sunday to cheers, flares and banners from cheering fans.

“It was pretty unbelievable… Goosebumps. You could feel it on the bus,” Herdman said of the reception.

It was -5°C, feeling like -7, at the 3 p.m. ET kickoff, and it got colder as the afternoon progressed. Despite the cold, there was a festive atmosphere with fans waving flags chanting “Sweet Caroline” as they waited for the teams to enter the field. The crowd then delivered an impassioned rendition of “O Canada.”

After losing 1-0, the Americans started to mount some attacks but lacked a clinical finish. The Canadian defenders did their part, throwing their bodies in the way as the United States held the advantage in possession of the ball.

Canadian defender Steven Vitoria was booked for a professional foul in the 31st minute, a second yellow meaning he will miss the El Salvador game.

Chelsea star Christian Pulisic had a chance from a free-kick just outside the Canadian penalty area in the 36th minute but shot high.

It was Milan Borjan, who grew up in Hamilton, to the rescue with a spectacular reflex save in the 43rd minute, using his right hand to snatch a Weston McKennie header from a Pulisic corner. The Red Star Belgrade goalkeeper, who made two crucial saves in the win over Honduras, hammered the Canada badge on his chest after disowning the Americans.

USA had 64% possession in the first half, but only one of their seven shots was on target in the opening 45 minutes.

The Americans continued to press in the second half, with Canada looking to counterattack through David and Larin. Borjan comfortably handled a Brenden Aaronson shot in the 59th minute.

Turner came out big in the 70th, stopping David’s long-range shot and then Larin’s point-blank effort on the rebound.

Larin came off in the 73rd minute to a standing ovation. USA coach Gregg Berhalter turned to his bench, bringing in all of his available substitutes in the 76th minute.

The visitors finished with 10 men with defender Chris Robinson limping in the final minutes and Berhalter without subs.

Canada were without Bayern Munich star Alphonso Davies, who was sidelined with myocarditis, an inflammation of the heart muscle, after testing positive for COVID-19.

“Time to show #canmnt is here to stay. Good luck my teammates tonight,” Davies tweeted ahead of kickoff.

Once again, the 21-year-old from Edmonton still managed to entertain, streaming live on Twitch as he watched the game and celebrated Larin’s goal.

The Canadian starting 11 entered the game with a total of 345 selections, compared to 262 for the Americans.

Tyler Adams captained the United States for the seventh time. The team had previously gone 4-0-2 in games where Adams wears the armband.

The United States was missing defenseman Brooks Lennon (ankle) and forward Tim Weah, who was unable to enter Canada due to his vaccination status.

Weah, who plays at his soccer club for Lille, received his first dose of the vaccine and then contracted COVID-19 while awaiting his second shot, a combination that meets all vaccination requirements in France but not in Canada, according to Berhalter.

Canada and the United States were tied 1-1 when they met in Nashville in September in the two teams’ second final-round outing.

Sunday’s match was the first between the two on Canadian soil since October 2019, when Canada beat the United States 2-0 in the CONCACAF Nations League to end a 34-year, 17-game streak without a win against its North American neighbour.

It was also the first-ever game at Tim Hortons Field for Canadian men.

This report from The Canadian Press was first published on January 30, 2012