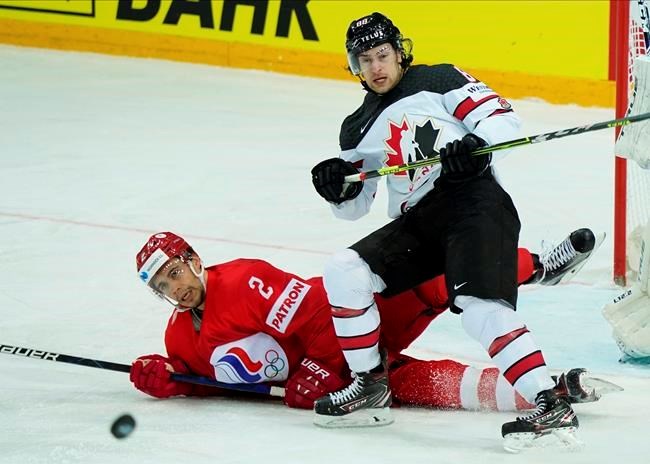 RIGA, Latvia – Andrew Mangiapane scored in overtime as Canada beat Russia 2-1 in the quarterfinal at the World Hockey Championship on Thursday.

RIGA, Latvia – Andrew Mangiapane scored in overtime as Canada beat Russia 2-1 in the quarterfinal at the World Hockey Championship on Thursday.

The Calgary Flames forward’s goal on an assist from Troy Stecher, 2:12 in extra period gave Canada the upset victory.

After accepting a pass from Mangiapane, Stecher escaped two Russian defenders and returned the ice to his teammate for a highlights winner.

Canada will face the United States in the semi-finals on Saturday. Finland face Germany in the other semi-final. The final is Sunday.

After losing their first three games of the tournament, Canada won the next three before losing in a shootout to Finland to secure fourth and final playoff place in their group.

Canada narrowly avoided missing the playoffs for the first time at an Olympics or world championship.

Russia, meanwhile, won six of the seven preliminary round games to finish first in the other group.

Adam Henrique scored the power-play tying goal for Canada in the third period. Yevgeni Timkin opened the scoring for Russia.

Darcy Kuemper blocked 24 shots for Canada, while Sergei Bobrovsky made 23 saves for Russia.

In the remaining quarter-finals, Germany beat Switzerland 3-2 in a shootout, the United States beat Slovakia 6-1 and Finland edged the Czech Republic 1-0.

This report by The Canadian Press was first published on June 3, 2021.

Coronavirus: What’s Happening in Canada and Around the World Thursday

US-Canada border restrictions extended through July 21, despite mounting pressure to…

BREAKDOWN: Alberta to drop all COVID restrictions on Canada Day