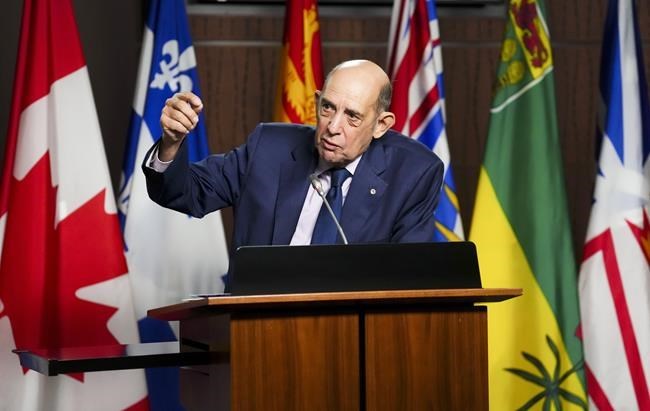 OTTAWA — Record levels of anti-Semitism were recorded in Canada last year, with sharp increases in Quebec and British Columbia, according to a report released Sunday.

OTTAWA — Record levels of anti-Semitism were recorded in Canada last year, with sharp increases in Quebec and British Columbia, according to a report released Sunday.

The annual audit by Jewish advocacy group B’nai Brith found there were 2,799 anti-Jewish hate crimes, including beatings, vandalism of synagogues and swastikas in schools.

In one recorded incident, a man allegedly gave a Nazi salute before assaulting a woman in a Toronto subway station, according to the report.

In another, an employee of an Ontario liquor store was assaulted by a customer who called him “a filthy jew whore.”

In January, swastikas were spray-painted on the doors of a synagogue in Westmount, a suburb of Montreal. In June, the Montreal Kosher Bakery was set on fire and in December, in Mont-Royal, Quebec, huge swastikas were drawn in the snow on an outdoor hockey rink.

The report found that there had been an increase in anti-Jewish hate crimes last May, coinciding with an escalation in violence in Gaza, the West Bank and Israel. Pro-Israel Jewish protesters were beaten, rocked and spat at.

At an anti-Israel rally in Winnipeg, a man marched a sign showing a figure throwing a Star of David into a trash can above the slogan, “Please keep the world clean.”

“If you’re Jewish, you’re far more likely to be a victim of a hate crime than if you’re a member of another minority,” Matas said.

He told a news conference in Ottawa that there was an “increase” in anti-Semitic incidents on college campuses.

Conservative MP Melissa Lantsman said there was “a rising tide of anti-Semitism in this country” not only among the far right but also among university professors.

“Anti-Semitism is one of the most horrific manifestations of racism,” she said.

The report found that harassment of Jewish Canadians fell slightly to 2,460 incidents in 2021, from 2,483 in 2020. But there was a 12% increase in hate online, attributed to more people communicating online during the COVID-19 pandemic.

B’nai Brith, which verifies the incidents, found that some Jewish federal candidates, including Montreal Liberal MP Anthony Housefather, had their posters smeared with swastikas.

At a news conference in Ottawa on Monday, Housefather said anti-Semitism “is a serious problem.”

He said he personally saw people in a car driving down a busy street in his constituency “shouting insults” from the windows, including “kill the Jews, kill the Jews.”

The MP said the abuse had scared many voters and one had asked her if she should remove the mezuzah, a small decorative case containing Torah lines, from outside her door, as it would identify her house as a Jew.

The most anti-Semitic incidents occurred in Quebec last year, which recorded 828 incidents last year, compared to 686 in 2020.

Anti-Jewish abuse rose sharply in Alberta and more than doubled in the Prairies and Nunavut.

NDP MP Randall Garrison, who represents Esquimalt-Saanich-Sooke, said he was shocked by the rise in cases in British Columbia

The report included a case in Richmond, where a wooden post with the message “COVID is Jew World Order” was found on a busy street.

This report from The Canadian Press was first published on April 25, 2022.