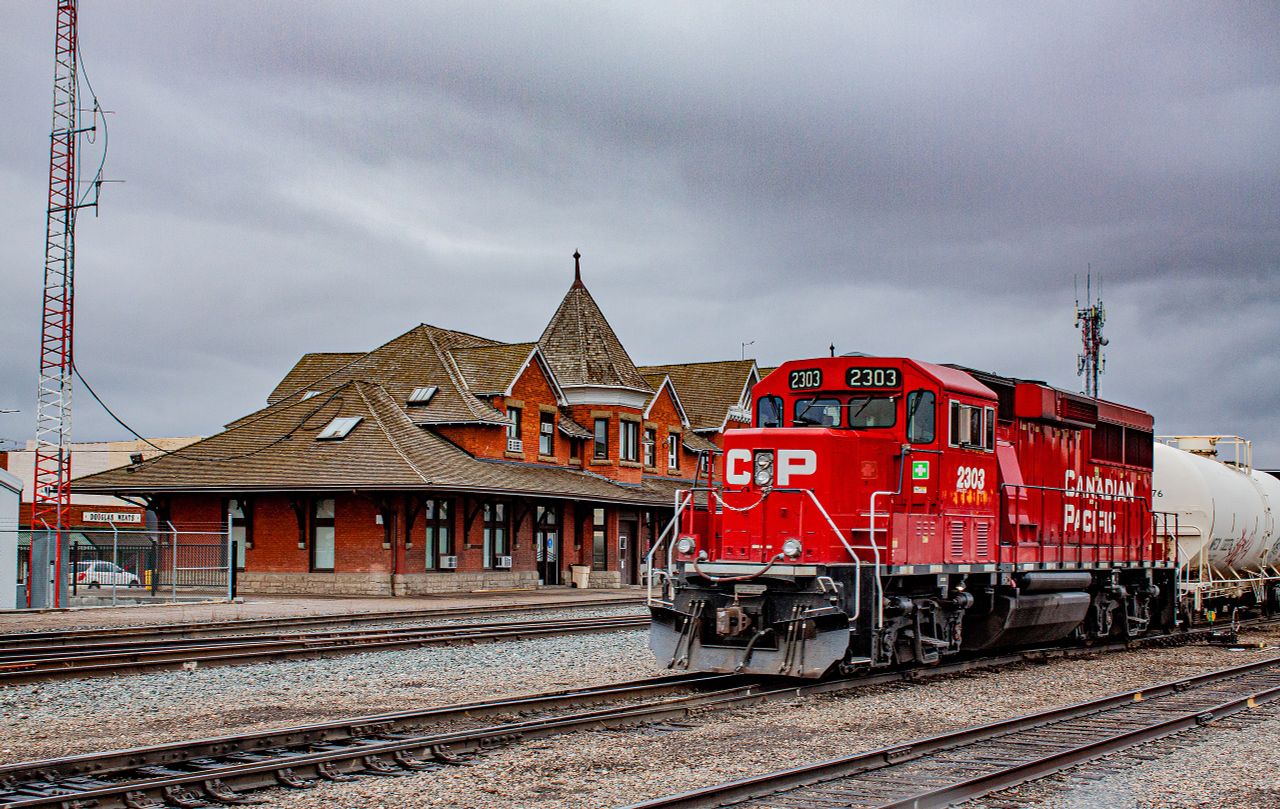 Do you work for Canadian Pacific or another railway? contact us and tell us about the problems you are having. All comments posted will remain anonymous.

More than 3,000 Canadian Pacific railway workers voted to authorize the strike by 96.7%, the Teamsters union in Canada announced on February 28. The strike, which could begin as early as March 16, would be the fourth at the railroad in a decade. , following the strikes of 2012, 2015 and 2018.

The issues for workers – which include locomotive engineers, conductors, trainmen and yardmen – are wages, pensions and benefits. Canadian Pacific (CP), which operates primarily in Western Canada and the American Midwest, is one of seven Class I railroads in the United States.

The strike vote is the latest indication of a growing climate of opposition and activism among railroad workers in North America. In January, 17,000 BNSF conductors and engineers voted to authorize a strike against management’s unilateral imposition of a new “Hi-Viz” attendance policy, which threatens to wipe out anything left of the personal time of workers and to lay off very old workers. However, the strike was blocked by a federal court injunction, which was repeatedly upheld in subsequent rulings.

The Brotherhood of Locomotive Engineers and Officers (BLET) is a division of the Teamsters union. However, the BLET did not mention a word of the CP strike vote on its website or social media pages, nor did the Teamsters in Canada mention the struggle of BNSF workers in the United States. , demonstrating how pro-corporate unions seek to isolate and sabotage workers’ struggles along sectoral and national lines.

Instead, the BLET focused its full attention on enforcing the no-strike injunction and threatening and intimidating workers for seeking to oppose it, or even speaking to the press. . While the vote was still underway in Canada, the BLET was reacting furiously against the workers’ courageous decision to found the BNSF Rank and File Workers’ Committee.

In its founding statement, the committee said its purpose was “to organize the railway workers ourselves as an alternative source of power against management, well-heeled union bureaucrats and ‘government by injunction’. powerful allies, the international working class, for their support,” including “workers on other Class I carriers who face similar attendance policies.”

In the United States, the anti-democratic Railway Labor Act, first enacted in 1926, is designed to virtually ban strikes on the railroads. In the words of the judge who issued the injunction, the law establishes “a mandatory and ‘virtually endless’ process of ‘negotiation, mediation, voluntary arbitration and conciliation.’ Indeed, BNSF workers were kept at work for two years without a contract.

Labor laws in Canada are not as onerous as in the “land of the free”, but the government still regularly intervenes against strikes, particularly in the railway industry. It has long been common, for example, for parliament to pass a special law to prohibit a particular strike and order railway workers back to work.

Under the current Liberal Party government of Justin Trudeau, the preferred method has been to use the services of unions to prevent or end strikes. It’s the Canadian equivalent of Biden’s self-proclaimed “most pro-union administration in American history,” in which the White House used union bureaucracy to place workers under a de facto form of labor trusteeship. ‘State. That strategy is increasingly apparent both at the BNSF and in the oil industry, where the United Steelworkers are moving quickly to enforce a sell-out contract for 30,000 refinery workers after several meetings with Biden and other officials.

Trudeau was able to rely on the Teamsters to sell strikes to Canadian Pacific in 2018 and Canadian National in 2019 with contracts that dropped all key workers’ demands. Those strikes were over health care cuts, railroad plans to switch to one-person train crews and onerous work schedules — exactly the same issues American railroad workers face.

However, while the Teamsters effusively praised Trudeau’s supposedly more “moderate” stance, Ottawa held back preparations for direct government intervention to criminalize strikes. At the same time, Teamsters Canada President François Laporte pledged to support CN’s profitability, saying, “I understand that we [the union] you have to meet the [company’s] Ultimately, but on our side, we have to protect our people.

The experience in Canada reveals the BLET’s self-serving claims that their hands are tied by the injunction. North of the border, where workers are fighting the exact same issues, the same union is sabotaging their struggles without even needing court injunctions. This shows that the unions are only auxiliaries of the management and the government controlled by rich bureaucrats, for whom the injunctions are only additional ammunition against opposition from below.

There is no doubt that there will be strong pressure from Biden and Trudeau to prevent a strike at Canadian Pacific. Within financial and corporate circles, there are concerns not only about the economic but also the geopolitical consequences on supply chains that this strike could have. Indeed, it was also the overriding consideration behind the BNSF injunction, as Judge Mark Pittman explicitly referenced supply chains in his original ruling and cited Harry Truman, who used war measures against strikers during World War II and the Korean War.

A strike at CP could threaten U.S. fertilizer supplies on the eve of planting season, Bloomberg News reported, under conditions where food prices are already rising due to the war between the Ukraine and Russia, two of the world’s leading grain exporters. .

On Thursday, the world’s largest supplier of crop nutrients, Nutrien Ltd., issued a statement calling on the Trudeau government to intervene to block the strike, writing: “We would be very disappointed to see a labor dispute have such a significant impact. agricultural supply chains and therefore we hope the Canadian government will consider intervening to avert another transportation crisis.

While Nutrien cynically cites concern for the global food supply as its motivation, grosser material interests are at work. A strike could threaten the ability of North American agribusiness to take advantage of rising food prices and reap super profits from the conflict in Ukraine, which has been fueled and encouraged by states United and NATO.

Despite official wrangling over the sanctity of supply chains, the small group of hedge funds and wealthy investors who control the rail industry have pushed both the workforce and the railroad infrastructure iron in their will to squeeze every last penny of profit. BNSF is owned by Berkshire Hathaway, which in turn is owned by Warren Buffett, the eighth richest person in the world, with a fortune of over $110 billion. Bill Gates, the fourth richest, is the main shareholder of Canadian National (CN).

The grotesquely misnamed London hedge fund The Children’s Investment Fund Management (TCI) is CP’s largest shareholder, but also has a large stake in rival company CN. At both companies, TCI is pushing for greater consolidation and massive cuts. Decades of industry consolidation have reduced the number of Class I railroads in the United States from hundreds to seven, and that number will soon be reduced to six due to the $31 billion merger between Canadian Pacific and Kansas City Southern came in late last year. The new company will be known as Canadian Pacific Kansas City.

KCS, despite being the smallest and weakest of the Class I railroads, nevertheless controls the vital rail links between the American Southwest and Mexico. The merger would create “the world’s first transnational railroad,” said one industry commentator, with a unique network stretching from the oil fields and agricultural producers of Canada’s Prairie provinces, to major port facilities in the New Orleans and Houston, to the Mexican state of Veracruz. on the Gulf Coast.

In a demonstration of how the industry is controlled and manipulated by a small handful within the financial aristocracy, TCI aggressively opposed a CN bid for Kansas City Southern to prevent a war of auction and to ensure the success of CP’s bid. He is now campaigning for major savings at CN, citing imminent competition due to the merger of rivals which he himself played a major role in brokering.

Unions, even those operating in multiple countries, seek to divide workers by nationality and have no response to the relentless assault on living standards and working conditions. The working class must oppose the global strategy of consolidation and cost reduction of the capitalists with its own international strategy, based on the unity of railway workers in the United States, Canada, Mexico and the world. This means organizing a network of rank-and-file committees independent of the unions, to wage a united fight against brutal working hours, wage and benefit cuts, and deteriorating infrastructure.