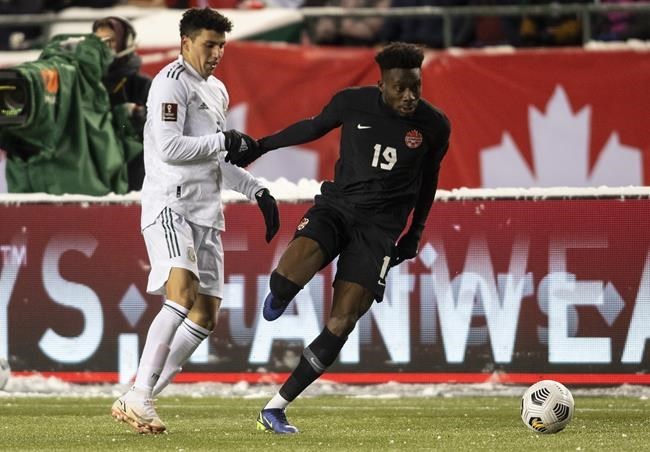 Canadian soccer star Alphonso Davies has been named the 2021 CONCACAF Men’s Player of the Year after helping Canada qualify for the World Cup for the first time since 1986.

Canadian soccer star Alphonso Davies has been named the 2021 CONCACAF Men’s Player of the Year after helping Canada qualify for the World Cup for the first time since 1986.

CONCACAF, the football federation for North and Central America and the Caribbean, presented its awards for last year on Monday.

Davies, a 21-year-old from Edmonton, has played in seven World Cup qualifying games for Canada in 2021, with the team going 3-0-4 in those games. The streak included a 4-1 win over Panama which featured a scoring goal from Davies.

Davies came out of nowhere on the right flank to steal the ball from under the feet of defender Harold Cummings, who thought the ball was about to go out.

The speedy full-back got to the ball before he did, danced around defender Fidel Escobar and – using team-mate Jonathan David as a decoy – fired a low shot that left goalkeeper Luis Mejia rooted in place for a lead 2-1.

Canada followed up Panama’s victory with a pair of huge wins in November in Edmonton – 1-0 over Costa Rica and 2-1 over Mexico – which propelled Canada to the top of the regional qualifying table.

Davies missed all six of Canada’s qualifying matches in 2022 after being sidelined with symptoms of myocarditis – a mild heart condition – following an episode of COVID-19. Canada went 4-2-0 in those matches to book its ticket to the World Cup, which begins in November in Qatar.

While off the pitch for those crucial qualifying matches, Davies made his presence felt as he enthusiastically cheered on his teammates on his Twitch channel.

Davies recently returned to training with Bayern and said he plans to return to action soon.

This report from The Canadian Press was first published on April 4, 2022.