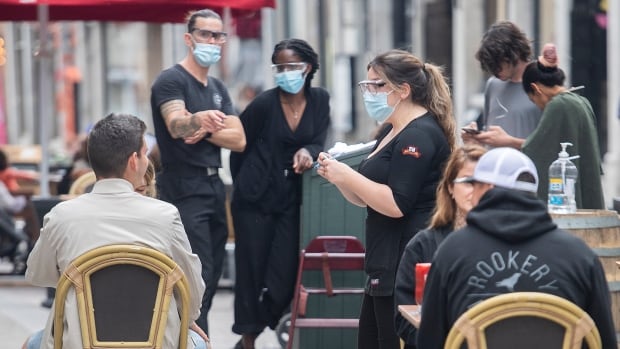 Coronavirus: What’s Happening in Canada and Around the World Monday

Quebec downgraded several regions – including Quebec – from the highest pandemic alert level on Monday, with the province reporting fewer than 300 new cases of COVID-19 for the first time since mid-September.

Health officials have reported 276 new infections and one additional death attributed to the novel coronavirus. They said hospitalizations had dropped by two, to 362. They said 89 people were in intensive care, down from one. The last time the province reported fewer than 300 daily cases was on September 17, with 297.

Prime Minister François Legault said last week that the COVID-19 situation had improved enough to allow eight regions to go fully or partially to the orange alert level from the red level.

On Monday, five regions – including Quebec – moved to the orange level, which means that gyms and restaurants inside restaurants can reopen. In the Chaudière-Appalaches, Estrie and Bas-St-Laurent regions, several municipalities remained on the red alert level while the rest of the region turned orange on Monday.

Montreal and Laval remain red zones, although the Prime Minister has said he expects both zones to turn orange on June 7.

Last week, the government eased restrictions across the province, lifting the curfew and allowing private outdoor gatherings, even in Montreal and Laval.

Nova Scotia, meanwhile, reported 17 new cases of COVID-19 on Monday, as infection rates continue to decline. Over the Victoria Day long weekend, the number of active cases in the province fell below 1,000 for the first time since May 3.

More than 23.8 million doses of COVID-19 vaccine have been administered to date across the country, according to Monitoring of CBC vaccines, which means that over 57 percent of eligible Canadians received a first dose.

In Ontario, people 80 years of age and over can postpone their second dose of vaccine to just four weeks after receiving their first vaccine.

The province reported 13 more disease-related deaths and 916 new cases of COVID-19 on Monday – the lowest one-day number the province has seen since mid-February. The number of hospitalizations stood at 731, according to Ontario health officials, with 617 people in intensive care due to COVID-related illness.

WATCH | A specialist explains why AstraZeneca is safe with an extended expiration date:

People should be assured that they are getting the same COVID-19 vaccine after Health Canada extended the expiration date of 45,000 doses to July 1, says Dr. Lynora Saxinger, an infectious disease specialist in Edmonton. 6:05

Nunavut and Yukon each reported no new cases of COVID-19 on Monday. Nunavut Premier Joe Savikataaq said there are now nine active cases in the territory. Health officials in the Northwest Territories has yet to provide updates on Monday.

Atlantic Canada Monday, Nova Scotia reported 17 new cases, the lowest number since April 4. The province is reopening schools this week and lifting restrictions on travel in the province on Tuesday.

Newfoundland and Labrador reported two new confirmed cases of COVID-19 on Monday. The province has 101 known active cases of infection and two people are currently hospitalized.

In the Prairie provinces, Manitobans who received a first dose of AstraZeneca-Oxford vaccine may receive a second dose of Pfizer-BioNTech or Moderna vaccine if they meet provincial eligibility criteria, depending on the province. Manitoba reported 303 new cases of COVID-19 on Monday, although officials said the figure was likely an undercount due to technical issues. The province recorded 364 healings and one additional death.

In Saskatchewan, health officials reported 113 new cases and one new death on Monday.

Alberta As of Monday, 263 new cases and eight more deaths were reported as it prepares to move forward with the first step of its plan to reopen on Tuesday.

WATCH | Bonnie Henry reflects on the news from Kamloops ahead of the BC vaccination update:

Provincial Health Officer Bonnie Henry took time to speak to the news of children’s remains found on the grounds of a former residential school in Kamloops, B.C., before providing an update on the progress of British Columbia with the COVID-19 vaccination. 4:34

WATCH | Manitobans who have obtained AstraZeneca can have Pfizer or Moderna for the 2nd shot:

Manitobans who received a first dose of AstraZeneca-Oxford COVID-19 vaccine may receive a second dose of Pfizer-BioNTech or Moderna if they meet the eligibility criteria, depending on the province. 1:17

As of Monday evening, more than 170.4 million cases of COVID-19 had been reported worldwide, according to an online coronavirus tracking tool operated by the United States-based Johns Hopkins University. The reported worldwide death toll stood at more than 3.5 million.

the World Health Organization on Monday revealed new names for the worrying variants of COVID-19 that were so far known by multiple names and numbers.

As such, the four variants considered to be of concern by the UN agency – and generally known to the public as the variants first identified in the UK, South Africa, Brazil and India, and by sometimes awkward technical names such as B117 or B1617 – will now be assigned the letters alpha, beta, gamma and delta in the order of their detection.

LISTEN | Should students who wish to live in residency at the post-secondary level be vaccinated?

Western University is making COVID-19 vaccines mandatory for students who wish to live in residence this fall. We discuss the decision and the ethics surrounding it with Alan Shepard, president and vice-chancellor of the University of London, Ontario; and Vardit Ravitsky, professor of bioethics at the University of Montreal. 20:24

In the Asia Pacific region, a sharp increase in cases of new variants in parts of Southeast Asia that had been less affected by the pandemic has led to further restrictions, plant closures and attempts to rapidly scale up programs to vaccination.

Vietnam will suspend incoming international flights to its capital Hanoi from Tuesday.

The Philippines extended coronavirus restrictions in the capital and neighboring provinces on Monday until mid-June to contain infections which have declined since peaking in April. Non-essential travel will remain prohibited. The Philippines has the second highest number of COVID-19 cases and deaths in Southeast Asia, after Indonesia.

China reimposed anti-coronavirus travel controls in its southern province of Guangdong on Monday, announcing that anyone leaving the populated area must be tested for the virus following a spike in infections that have alarmed authorities.

The Indian Serum Institute will increase production of AstraZeneca COVID-19 vaccines by nearly 40% in June, officials said on Monday, in a first step to alleviate a shortage that has deepened the country’s battle against the coronavirus. The second most populous country in the world has been battling a catastrophic COVID-19 outbreak since last month, which is only now starting to ease after killing tens of thousands of people.

In the Americas, Venezuela will receive five million vaccines against the coronavirus through the COVAX program starting in July and will seek to receive doses of the Johnson & Johnson inoculation, President Nicolas Maduro said on Sunday.

In EuropeBritish health authorities aim to vaccinate 15,000 people in one day at Twickenham rugby stadium in London as part of a race to contain a variant of the rapidly spreading coronavirus.

The strain, first identified in India, accounts for the majority of new cases in the UK, which is seeing an increase in infections after weeks of decline. Scientists say the variant is more transmissible than even the previously dominant strain first found in the UK, but current vaccines are effective against it.

Turkey further relaxed measures to curb coronavirus infections on Monday, including partially lifting a weekend lockdown and opening restaurants to a limited number of customers. President Tayyip Erdogan said the lighter measures, in response to the drop in the number of cases, would go into effect on Tuesday. Under the new rules, nationwide daily curfews are delayed from one hour to 10 p.m. local time.