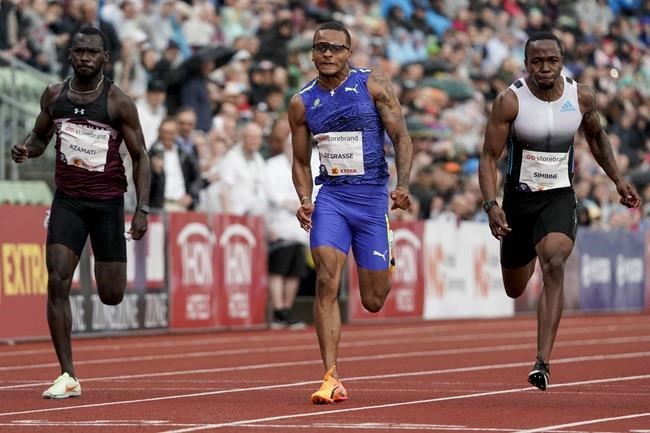 Canadian sprint star Andre De Grasse was knocked out of the national track and field championships by COVID-19 just a month before the world championships.

Canadian sprint star Andre De Grasse was knocked out of the national track and field championships by COVID-19 just a month before the world championships.

The six-time Olympic medalist had returned to form after a foot injury early in the season, winning the 100 meters at the Diamond League meeting in Oslo last week in a season-best 10.05 seconds.

“I’m obviously quite disappointed not to be able to race at home in front of the Canadian fans in Langley,” De Grasse said in a statement. “Hopefully I can get back to training fairly soon and prepare for the rest of the season.”

De Grasse is among several top athletes to withdraw from the Canadian Championships which begin Wednesday in Langley, B.C.

While the virus is a setback in De Grasse’s training, he should be fully recovered in time for the World Athletics Championships, which take place July 15-24 in Eugene, Ore.

Athletics Canada has an injury/illness exemption built into the qualification criteria that allows athletes to miss national championships. They can be named to the team that reached standards in the qualifying window.

“Andre De Grasse, Damian Warner and Mohammed Ahmed are absent from (the national event) after receiving medical exemptions from our medical staff,” the national federation said in a statement. “Athletics Canada expects all three to be healthy and ready for the start of the world championships.”

The 27-year-old from Markham, Ont., De Grasse finished fourth in the Paris Diamond League 200m on Saturday. His time of 20.38 was the best of the season, but still far from his Canadian best of 19.62, he raced to win gold at the Tokyo Olympics. He tested positive for COVID shortly after returning to his Florida home.

With his three medals in Japan last summer, De Grasse became Canada’s most decorated male Olympian with six podium finishes. He won a medal in each of his Olympic races. Short track speed skater Charles Hamelin matched De Grasse with his sixth medal at the Beijing Games last winter.

DeBues-Stafford, who finished fifth at the Tokyo Olympics in the 1,500m, was recently forced to halt her outdoor season due to a stress reaction in her pelvis.

This report from The Canadian Press was first published on June 21, 2022.