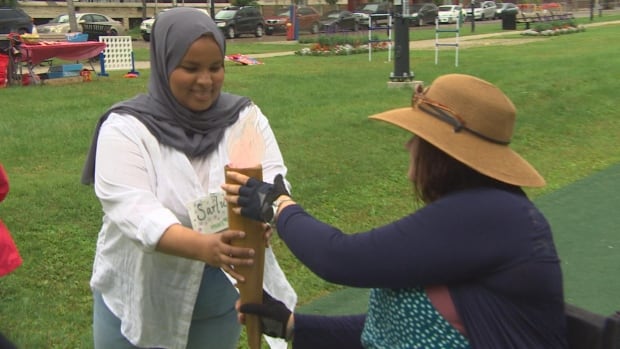 Winnipeggers passed a torch around Central Park for an annual event this weekend, highlighting the continued importance of human rights.

Manitobans for Human Rights, an organization created eight years ago to educate Manitobans about the importance of human rights, held its seventh annual Dignity Torch Relay on Sunday.

Zara Kadhim, the organization’s logistics coordinator, said although the event was scaled down this year, the hope was to bring the community together.

“Education is the first step,” she told Radio-Canada in an interview, adding that the province still has a long way to go.

Friendly Manitoba is doing much better than many places in the world on human rights, Kadhim said, but issues like homelessness, MMIWG2S and the struggles of immigrants and refugees are becoming more normalized in the community. province.

“We are almost insensitive to human rights violations,” she said.

The aim of the relay was to raise awareness of these issues and to focus on peoples’ similarities rather than their differences, Kadhim said.

The peer support organization Anxiety Disorders Association of Manitoba, where all staff have had experience with anxiety, had its own resource booth at the event.

“Mental health is a human right,” said Vienna Code, the public education and communications coordinator for ADAM. “We need to promote it a bit more and understand that all humans deserve the right to mental health services.”

As the pandemic appears to be winding down, Code said more and more people are having trouble managing their nerves.

“People think they shouldn’t be anxious or have these thoughts anymore,” she said.

Code said it was important for young people to have earlier interventions for mental health issues.

“I think there’s still a stigma around mental health and I think that’s the most difficult barrier for people to step in and seek help.”

Sarah Parker, executive assistant of the Islamic Social Services Association, said the association attended the event to encourage people to be open to learning about Islam and Muslims.

“In a way, if they know about Islam and Muslims, then we can fight stereotypes,” she said.

“We believe that at the heart of human rights is human dignity.”

Floods in Pakistan have killed more than 1,000 people. It’s called a climate catastrophe