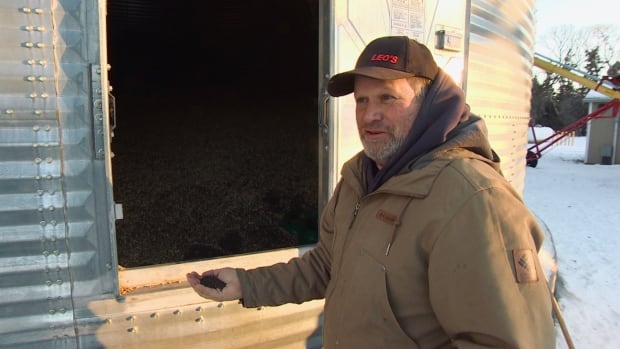 Drought on Prairies Drops Canola and Wheat Production by Over 35% in Canada: StatsCan

Curtis McRae opens a half-empty grain silo and collects a handful of seeds.

“It’s not pretty canola,” he jokes.

The farmer in St. Andrews, Man., Only managed to produce half the canola he expected this year. All of its grain crops suffered as the Prairies were battered by months of drought.

“They’ve become dry enough to stop growing. It’s something we haven’t seen,” he said in an interview with CBC last week. “Throughout the season we knew we were in trouble.

The latest figures from Statistics Canada show he is not alone.

This summer’s drought has lowered crop yields across the country, according to the federal agency. Several important grains grown in Western Canada experienced the largest annual yield decline on record.

Soybean production for the country as a whole fell 1.4%, but in Manitoba, where the drought was most severe, soybean yields fell 17.1%. Barley and oat production also fell significantly.

For McRae, whose farm is just north of Winnipeg, the few rains that might have saved his thirsty soybean crop came in the form of hail, wiping out that crop along with his wheat. He had to claim crop insurance on almost all of his fields.

“This drought is the worst in 50 to 60 years,” said Trevor Hadwen, an agro-climate specialist at Agriculture and Agri-Food Canada, a federal department that advises farmers on how to better manage extreme weather conditions.

“It was all the way back to 1961 before we could see anything even comparable.”

Although drought is a normal occurrence in western Canada, it is becoming more widespread and severe, Hadwen said. This summer’s dry spell extended from Vancouver Island to northwestern Ontario.

Yields could have been even worse, he said, without improved farming practices.

“It’s a benefit to all of their management practices – the science that goes into plant breeding and the varieties that are available to growers this year,” he said.

Even though the farmers were doing all they could to get the most out of their crops, they were working with increasingly drier soil.

The 2021 growing season was particularly busy in the Prairies, particularly in Manitoba, as it followed several dry years.

Manitoba needs above-average precipitation this winter and spring to make up for that, Hadwen said.

So far, this has not been the case.

In the Prairies, 99 percent of farmland is still either “abnormally dry” or in a state of drought, according to the November report from the Canadian Drought Observatory.

It’s a sign that climate change is having an immediate impact on Canada’s agricultural system, according to the executive director of the Prairie Climate Center at the University of Winnipeg.

“The models, the science, take place in real time,” said Ian Mauro, associate professor in the university’s geography department. “These are serious things. “

While it can be difficult to immediately make a direct link between climate change and a specific weather event, drought is exactly what climate experts have warned against, Mauro said.

Science indicates that this is exactly what you would expect due to climate change.– Ian Mauro, Prairie Climate Center, University of Winnipeg

“We can absolutely say that the science is indicating this is exactly what you would expect due to climate change,” he said.

A silver lining for farmers like Curtis McRae is that the poor growing season has pushed up the price of canola.

Still, he says he cut his budget, refrained from purchasing farm equipment and instead prepared fertilizer for next year’s harvest.

“I don’t think you can ever break a farmer’s hope.”

Work and Study in Canada: Opportunities for International Students