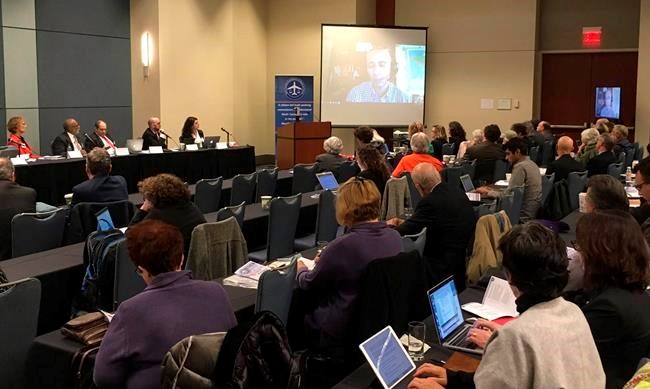 A former Guantanamo Bay detainee is suing the Canadian government for his alleged role in his 14 years behind bars marked by torture and intimidation.

A former Guantanamo Bay detainee is suing the Canadian government for his alleged role in his 14 years behind bars marked by torture and intimidation.

Mohamedou Ould Slahi, a Mauritanian who had lived in Montreal for less than two months, filed a $35 million lawsuit on Friday alleging that misinformation provided by Canadian authorities contributed to his detention at the offshore U.S. military prison, where he said he suffered severe beatings, sleep deprivation and sexual assault.

A statement from Slahi, whose story has become a best-selling memoir and Hollywood movie, says surveillance by Canada‘s spy agency and police was passed on to his American interrogators. Eventually their “torture broke him” and prompted a false confession to a plan to blow up the CN Tower – a building he had never heard of – according to court documents.

Jody Brown, one of two lawyers representing Slahi, described his client’s saga as the result of a “vicious cycle” of faulty intelligence and so-called enhanced interrogation techniques – torture or degrading treatment of detainees under the George W. Bush administration.

“You provide information, which results in someone being detained. And even though you’re not the party holding it – you’re not the one trampling on it – when you receive that information from the torture and that you act on it, you are the vindicator,” Brown said in a phone interview, calling the Canadian government “an accomplice in torture.”

Slahi, now a 51-year-old writer-in-residence with a Dutch theater company, left Canada in 2000 after Canadian Security Intelligence Service and RCMP authorities began questioning him about his alleged links to Ahmed Ressam. , the so-called millennium bomber who planned to attack the Los Angeles airport. The two had briefly attended the same grand mosque in Montreal.

The Federal Court of Canada ruled in 2009 that Slahi, who was once a permanent resident, was not entitled to the intelligence documents because the then detainee was neither a citizen nor the subject of legal proceedings in Canada. .

The Attorney General of Canada has yet to file a response to the allegations against CSIS and the RCMP.

CSIS declined to comment on a court case, or “confirm or deny details” of any investigation or intelligence shared with foreign states “in order to maintain the integrity of our operations.” RCMP did not immediately respond to questions on Saturday.

Surveillance of Slahi during his brief time in Montreal prompted him to return to West Africa, triggering a two-decade series of arrests, interrogations and imprisonment, the statement said. He was arrested upon arrival in Senegal and questioned by US officials on the same allegations that Canadian authorities had pursued.

“In the aftermath of September 11, 2001, Slahi was again arrested in Mauritania at the request of the United States. He was abducted and transported against his will on a rendition plane orchestrated by the CIA to Jordan, where he was interrogated and tortured for eight months, before being returned to Bagram airfield in Afghanistan, then to Guantanamo. Bay,” the statement read.

He was only released in 2016, remaining on restricted mobility in Mauritania, unable to leave the country until 2020, the court document says.

At Guantanamo, the information that formed the basis of Slahi’s interrogations was “absurd”, Brown said in an interview.

The documents say, for example, that Slahi’s interrogators pressed him about a phone call in Montreal in which he invited someone over for tea and asked him to bring some sugar.

“His interrogators insisted that the request for ‘sugar’ was code for ‘explosives,'” the statement read.

“The reality is that Mr. Mohamedou was in danger in part because he happened to be praying in a mosque, where he was in the wrong place at the wrong time and was under surveillance by the Canadian state,” Farooq said in a phone interview.

“Part of the reason this is so horrific is that the Canadian government and Canada’s National Security Administrations participated in the torture of a man who had done nothing wrong, that we were aware of. and that we tried to make sure Canadians never knew about it.”

Farooq drew comparisons with the case of Maher Arar, a Syrian-Canadian detained in New York in September 2002 and sent overseas by US authorities.

Finding himself in a dungeon-like prison in Damascus, Arar made a false confession about his involvement with al-Qaeda. He agreed to a $10.5 million settlement in 2007 and accepted an apology from then-Prime Minister Stephen Harper for “any role Canadian officials may have played” in the case.

Most recently, the case of Omar Khadr, a Canadian citizen who, at the age of 15, was detained at Guantanamo Bay for 10 years for the wartime murder of a US Army sergeant in Afghanistan , also resulted in a $10.5 million settlement with the federal government in 2018.

Slahi said he wanted to make sure what happened to him won’t happen to anyone else.

“I want Canada to promote human rights and democracy. … I want a better future for my son, my nephews and nieces,” he said.

This report from The Canadian Press was first published on April 23, 2022.

— With files from Jim Bronskill in Ottawa