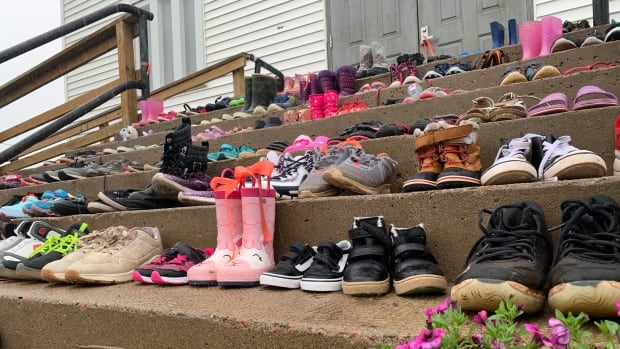 
Ground-penetrating radar was used to search various locations at the Shubenacadie Residential School site in central Nova Scotia in investigations similar to those that uncovered the remains of 215 children in Kamloops, British Columbia.

The group said in a press release that a number of locations on the Shubenacadie site have already been reviewed. He said no graves or human remains have been found so far.

Last week, the Tk’emlúps te Secwépemc First Nation said preliminary results from a ground-penetrating radar survey revealed the remains in Kamloops. Indigenous communities across the country are mourning the deaths of children in British Columbia, and demanding searches are taking place at all residential schools.

“I sat there and cried and said, ‘Oh my God I thought it was going to be over and now it’s happening,’ said Lottie May Johnson, a survivor of the Shubenacadie boarding school. “We knew there were burials but we didn’t know where.”

Johnson lit a holy fire on Sunday with a number of other community members in Eskasoni, Cape Breton to honor the lives of children in British Columbia.

It will burn until Wednesday.

“I walked in when I was 10 years old. I said I could have been one of those kids, probably. I was suffocated until I was unconscious by a nun and for a long time I couldn’t speak, I was scared. “

Johnson, who spent five years at the school aged 10 to 15, remembers being locked in what she called a dungeon on several occasions, in addition to being confined to bathrooms and closets.

The National Center for Truth and Reconciliation lists the names of 16 children who died while attending Shubenacadie Residential School, which operated from 1929 to 1967. The building was demolished in 1986.

The institution is described on the centre’s website as an institution that suffered from overcrowding, poor maintenance and poor construction.

The organization also takes note of a 1934 federal investigation into the flogging of 19 boys at school. They were definitely marked. No one was held responsible.

Now 76, Johnson has dedicated much of her life to healing and helping other survivors of Canada’s residential school system which has removed more than 150,000 children from their families.

The Truth and Reconciliation Commission, of which she was also a member, estimates that the actual number of children who died while attending school could be 6,000 or more.

A Sipekne’katik First Nation memorial near the site of the former Shubenacadie school is visited by a number of people.

They put shoes on the steps of the Catholic Church of Saint Kateri Tekakwitha to remember the children.

“I’m concerned about a relapse in the mental health of our people, they’ve been through a lot and our community is still feeling the effects,” said Chief Mike Sack, who welcomes the idea of ​​a full old school dig.

Similar memorials appear across the province, including the Basilica of St. Mary’s Cathedral in Halifax and the Membertou First Nation in Cape Breton.

Jada Paul, 16, is the young leader of the community. She said it was touching to see the support of so many people bringing shoes to the steps of the local St. Anne’s Church.

“It’s heartwarming, but it’s also heartbreaking to see that our people have been through so much,” she said.

The Mi’kmaq Rights Initiative said in a press release that it is now considering other possible locations to continue its search for remains with ground-penetrating radar, in addition to considering methods that can be used to search near the. Snides Lake.

Support is available to anyone affected by their residential school experience and to those triggered by the latest reports.

A National Residential Schools Crisis Line has been set up to provide support to former students and those affected. People can access emotional and crisis referral services by calling the 24-hour national crisis line: 1-866-925-4419.

Sydney and Halifax area schools to reopen on Thursday

Coronavirus: What’s Happening in Canada and Around the World Monday