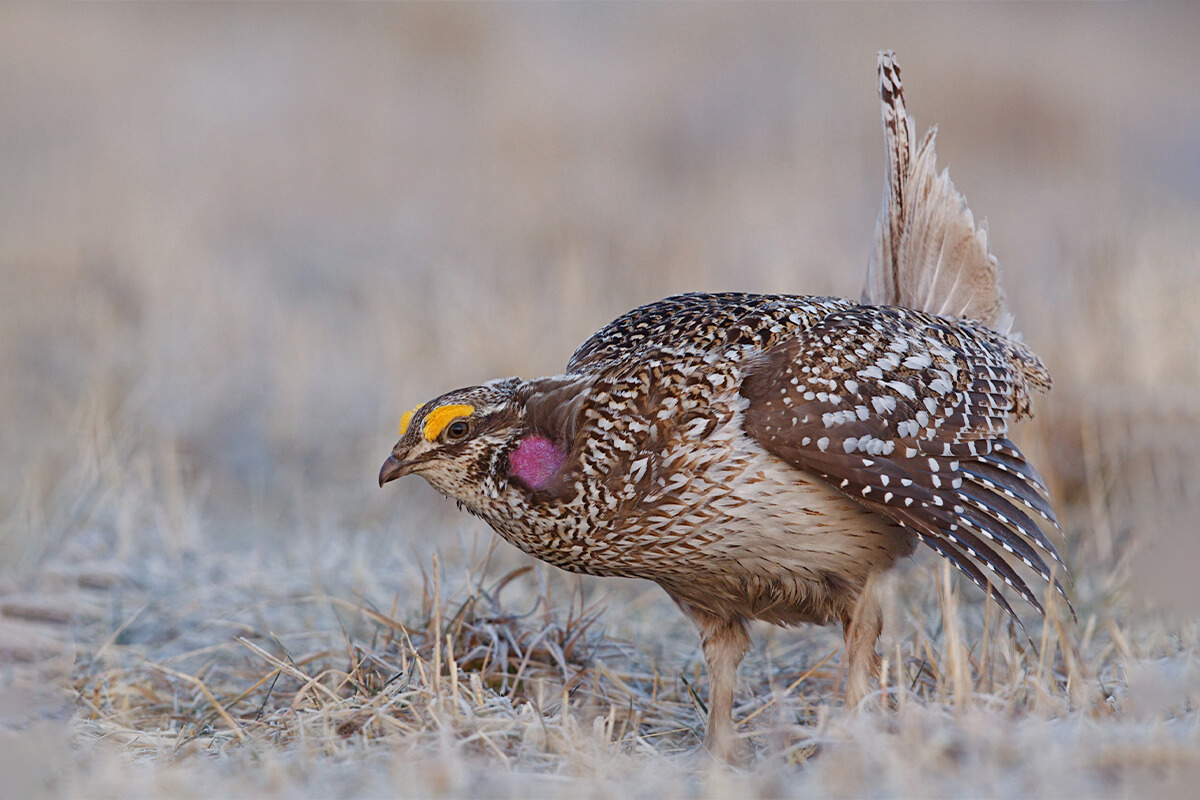 Because much of its range is in the northwestern United States, the sharp-tailed grouse is a species that can be successfully hunted on public lands in many states. (Photo by: Tom Reichner/Shutterstock)

A number of different grouse species can be found throughout much of the United States and North America, providing plenty of opportunities for those who enjoy hunting and hunting dogs. And across their vast range, these different species of grouse all have unique characteristics and prefer very different types of habitat than their many feathered cousins.

A member of the Phasianidae family, the sharp-tailed grouse, Pedioecetes phasianellus, is quite different in appearance and preferred habitat type from its better-known cousin, the ruffed grouse, commonly referred to as “the king of game birds.” Looking very much like a prairie chicken (they are closely related), the sharp-tailed grouse is known for putting hunting dogs – and hunters – to a rigorous test on the vast open prairies of America.

Primarily a mid-continent species, sharp-tailed grouse populations thrive in roughly the northern half of Nebraska, both Dakotas, nearly all of Montana (except the far western quarter), and into the northeastern third of Wyoming. Further west, the birds can be found in southeastern Idaho and pockets of western Idaho, with some limited populations existing in the northeastern part of Washington State. .

Although primarily a north latitude bird, the sharp-tailed grouse’s range dips into some more central states, extending as far south as southern and southwestern Colorado . Farther east, the birds are found in northern Minnesota, extending into Wisconsin and even parts of central Michigan. Interestingly, the sharp-tailed grouse also inhabits much of Alaska, where the birds inhabit nearly half of the middle portion of that state.

The sharp-tailed grouse is a grayish crow-sized bird with a small head and beak, short legs, and a pointed tail of medium length. Unlike other game birds, they are larger than a gray partridge, but smaller than a ring-necked pheasant. They are a muted, mottled color, looking like a nondescript grayish or brownish tint when rinsed off. When studied more closely, they are mottled brown with interspersed black, white, and even golden feathers. They have a white underbelly and undertail-coverts.

Since many hunters find sharp-tailed grouse when hunting in the open prairie for them along with a number of other grassland species, most consider them strictly a grassland bird. But although they are common in grasslands in their southern range, the birds are more often found along the edges of bogs in the boreal forests of their northern range. Northern birds are generally much darker in color than their southern counterparts. Sharp-tailed grouse feed on seeds, grain, and insects, and many are found near cultivated land when grain crops are ripe. They also feed on berries, buds and flowers. Insects like grasshoppers are a staple of their diet in the summer, especially for young birds.

In the spring, males congregate on display grounds to attract females for mating. Females will visit these lands, mate with a male, and then begin to build a nest. The female sharp-tailed grouse lays five to 17 eggs, with about a dozen being the average. The incubation period is 23–24 days, and the young are precocious, able to walk and take care of themselves soon after hatching. In a week or two, they can make their first short flights.

Since they are found in several different states and provinces, sharp-tailed grouse hunting seasons vary somewhat. For example, the season in North Dakota typically opens on September 1, while farther west in Idaho sharpie season does not begin until October 1. As with any game bird species, always check the regulations in the area you intend to hunt. before leaving.

While some people hunt sharpies without a dog by simply walking until they strike birds, the vast expanses of land that often must be covered to find the birds lend themselves more to a canine companion or two. Pointers are probably the most popular, with larger running dogs able to cover a large area of ​​grassland in a short time being preferred by most in more open areas. Where the birds are found in pockets of boreal forests or in thick areas along bogs, a pointer that runs closer will also give good results.

As with many other game bird species, some hunters prefer to pursue sharp-tailed grouse with flushes. Many sharpies have fallen to the shotgun of a hunter following a well-trained Labrador Retriever or Spaniel across the prairie. In a nutshell, whatever type of hunting dog you own and love is the one you should take on a sharpie hunt!

As with other grouse hunting, the best place to start is near the birds’ favorite food sources. Those areas that also have a good source of water nearby are sure to harbor birds. Because much of its range is in the northwestern United States, the sharp-tailed grouse is a species that can be successfully hunted on public lands in many states.

While guns and loads are always very personal considerations, most sharp-tailed grouse hunters have chosen a 12 or 20 gauge shotgun. Early in the season when the birds are less under pressure and closer usually an improved cylinder choke works quite well. Later in the season, when pressure birds have learned to flush at greater distances, these I/C chokes are often replaced with modified ones. For shooting, #7.5s and #8s are often used early, with #6s loaded later in the season when distances tend to increase.

Interestingly, with these tetras capable of flying over 42 miles per hour, most misfires aren’t caused by using the wrong guns, chokes, or charges, but rather by the hunters not getting in the way. enough training in shooting at flying targets in the fleet before making a trip to sharp tailed countries!

Snow continues to pile up in Prince Edward Island with a third major storm this month; 20-40 centimeters expected