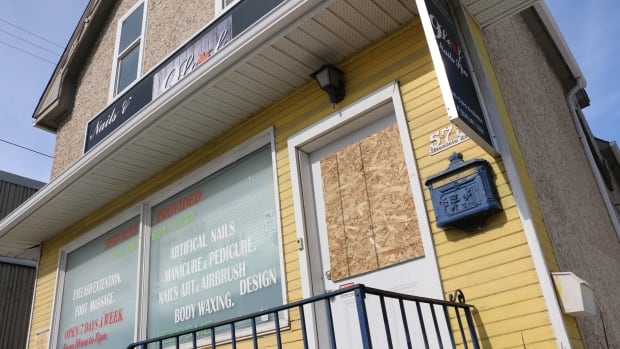 There’s broken glass on the doorstep of 573 Mountain Ave. A piece of plywood covers part of the front door. Manicure and pedicure advertising stickers remain plastered in the main window.

But this vacant building could soon become a real home if all goes well, according to Leslie Bellingham.

“All we have to do now is get building permits and then we’ll get started,” said the director of partnerships for Raising the Roof.

Bellingham says 573 Mountain will become housing for families and youth, based on contributions from the Winnipeg Boldness Project, Fearless R2W and North End Community Renewal Corp. – local groups that help vulnerable people in the area.

“They really identified, especially in this neighborhood, the need for bigger units that would be good for families,” Bellingham said in an interview.

Family units will be on the ground and top floors, while the basement will be used for young people who are aging without care, Bellingham says.

This project in the Mynarski neighborhood will be the first in Winnipeg for Raising the Roof. The group has purchased the vacant building and will act as developer. Fearless R2W staff are the ones who will help families and young people achieve their goals and live in the apartments.

On Friday, the town’s Lord Selkirk-West Kildonan Community Committee gave the green light to the project.

Bellingham predicts it will take a few weeks to confirm permits and then renovations can begin – all with a local construction company that employs people struggling to find jobs, including newcomers or those recently incarcerated.

She says the project is about $30,000 short of being fully funded.

Just south of this housing project is a large former warehouse at 83 Kate Street. The building now houses the offices of the Adult and Teen Challenge of Central Canada. The national group uses evangelism and an abstinence-based approach to help people with their addictions, according to Daniel Emond.

“Whether you are just seeking help for the first time to break free from your addiction, or you have been sober for three years and are part of a sober living community, our approach is that every step is important and requires support,” the president said. and CEO of the local chapter of the organization said in an interview.

The organization also has treatment centers and offices in other Manitoba communities, including Brandon and Steinbach.

Emond’s goal is for the building at 83 Kate Street to become a “recovery supercentre” for addictions programs. The building would include 18 units so clients and potentially their families could stay for help, according to a report to the city. The goal, says Emond, is for the building to provide treatment from start to finish.

Although Emond was at City Hall on Friday to discuss putting up a fence and reducing the parking space, the area councilman raised more societal issues. Com. Vivan Santos (Point Douglas) said she’s worried the group doesn’t have a culturally sensitive program to help members of First Nations communities deal with the effects of residential schools.

“It’s a very sensitive topic for me,” Santos said during the meeting. “My neighborhood is very diverse. We have a lot of tough issues related to addictions, homelessness and poverty.”

While Emond said “the organization has always been committed to reconciliation,” Santos reiterated that she insisted on greater recognition of people in the area and addressing the root causes of addictions. She referenced the call for Siloam Mission to include indigenous practices in its programming.

“I hope we can learn from the mistakes of the past and realize that these are the demands our community needs,” she said.

Despite her concerns, Santos says she supports the project.

“I want to salute the work they are doing,” she said. “I know I was a bit harsh on them at first, but I want to be respectful here. This situation is very sensitive to me…and I appreciate them answering my questions.”

Emond says he believes the area is perfect for his program, citing its proximity to the Health Sciences Center, schools and churches.

The committee has authorized the project, but Emond says it is still in the fundraising phase. So far, they have raised $1 million out of a total of $8.5 million.