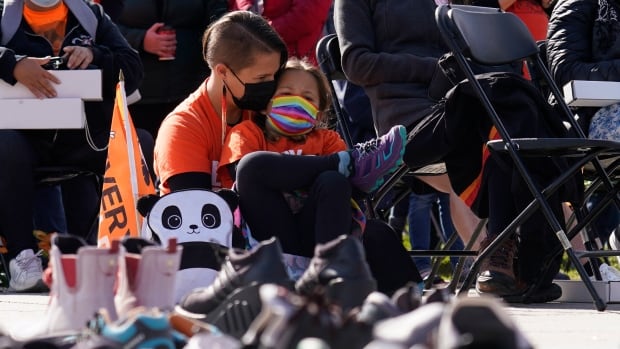 Canadians are called to â€œown their own truthâ€ about the history of the country and the treatment of Indigenous peoples on the first National Day for Truth and Reconciliation.

The day became a federal holiday earlier this year, as recommended by the Truth and Reconciliation Commission in its 94 calls to action. It will be held on September 30 each year.

It honors the children who died while forced to attend residential schools and the survivors, families and communities still affected by the legacy of the system.

WATCH | CBC coverage of the National Truth and Reconciliation Day:

Hundreds of people gathered in a ceremony held on Parliament Hill to mark the day.

Wakerakatste Louise McDonald Herne, a bear clan mother for the Council of the Mohawk Nation, called on Canadians to “know the history of this country and the corruption on which it is built.”

â€œYou have to correct the mistakes and you have to own your own truth,â€ she said.

“Two hundred and fifteen little voices woke the country up, 215 voices spoke to the world,” Commanda said of the 215 anonymous graves that were first discovered near a former residential school site in Kamloops, Colombia. British this spring. This number was later reduced to 200, but hundreds of other graves have since been discovered near other sites of old schools.

Commanda called on Canadians to open their hearts and listen to the truth in order to move forward with reconciliation.

â€œTake this beautiful gift that we are offering you; learn, listen and we will walk together to this country in a beautiful country for all our children,â€ she said, holding back tears.

In a separate ceremony at Tk’emlÃºps te SecwÃ©pemc Nation, near Kamploops Residential School, where the initial discovery of 200 anonymous graves was made, Assembly of First Nations National Chief RoseAnne Archibald said recognizing the past is only a first step towards reconciliation.

â€œTrue reconciliation is learning, sharing and growing as a country,â€ she said.

“The more we know about our origins, our common history and our responsibilities, the better we can meet current challenges and find our healing path together.”

On National Truth and Reconciliation Day, RoseAnne Archibald says now is the time to learn about the history of residential schools. 1:49

Queen Elizabeth issued a statement Thursday acknowledging “the work that remains to be done to heal and continue to build an inclusive society.”

“I join all Canadians on this first National Day for Truth and Reconciliation in reflecting on the painful history Indigenous peoples have endured in residential schools in Canada,” the Queen said in a statement.

Prime Minister Justin Trudeau also issued a statement encouraging Canadians to reflect on the impacts and legacy of residential schools, in particular highlighting the hundreds of anonymous graves near former school sites that have been uncovered this year.

â€œThe tragic location of anonymous graves on the sites of former residential schools across the country has reminded us not only of the impacts of colonialism and the harsh realities of our collective past, but also of the work that is paramount to advancing reconciliation in Canada. Â», Indicates the press release. noted.

Conservative Leader Erin O’Toole released a statement saying there is still work to be done to address the “devastating and harmful effects” of the residential school system.

â€œFor Canada to reach its full potential as a nation, reconciliation must be at the heart of these efforts. It starts with public commemoration, education and conversations about the painful and lasting impacts of residential schools, â€he said in his statement.

Governor General Mary May Simon, the first Indigenous person to assume this role, said today was a time for Canadians to face “uncomfortable truths.”

â€œAs we strive to recognize the horrors of the past, the suffering inflicted on indigenous peoples, let us all stand side by side with grace and humility, and work together to build a better future for all,â€ she said in a communicated. .

Across the country, people are encouraged to wear orange to raise awareness, support a native-led business or organization if they can, and take the time to learn and reflect.

WATCH | Tribute to survivors on the eve of National Truth Day of Reconciliation:

Residential school survivors and Prime Minister Justin Trudeau pay tribute to the lives and communities affected by the residential school system in a ceremony on Parliament Hill on the eve of the first National Day for Truth and Reconciliation. 1:11:02