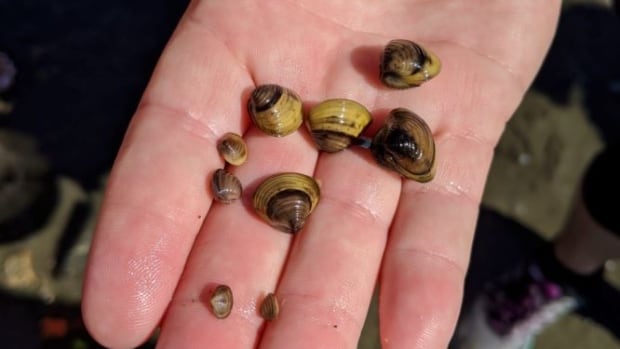 
The Central Kootenay Invasive Species Society (CKISS) is asking the public for help in preventing the spread of an invasive freshwater species called the Asian clam.

The non-native clams were found in the Pend D’Oreille River this spring, according to a written statement from the Department of the Environment, and while this is not the first confirmation of these clams in British Columbia, it is the the first time the authorities spot them. in the Central Kootenay region.

“They can outperform our native populations and also reduce the biodiversity in these ecosystems,” CKISS executive director Erin Bates told the CBC show. Dawn South. “The presence of a new invasive species means that our native species will face a new threat in addition to the threats currently posed by climate change and human activity.

In 2020, Asian clams were found in Shuswap Lake and they were also spotted in the waterways of the Lower Mainland.

Microscopic larvae of the invasive species could have “hitchhiked on a boat or machine” to get into the river.

“We wouldn’t expect this population to spread here naturally,” Bates continued, “but it is entirely possible that they have also spread through human activity and unfortunately [Asian clams] are also used as bait and can be found in aquariums. “

To prevent further spread, Bates urges people to clean and dry their watercraft and equipment to ensure invasive species are not moved between water systems. And never throw the contents of domestic aquariums into streams or lakes.

She also asks people to report any sightings.

“They’re usually triangular in shape and typically measure less than two and a half centimeters,” Bates said. “They can be yellow, green to light brown and they have very tall growth rings, which sets them apart from our native species.