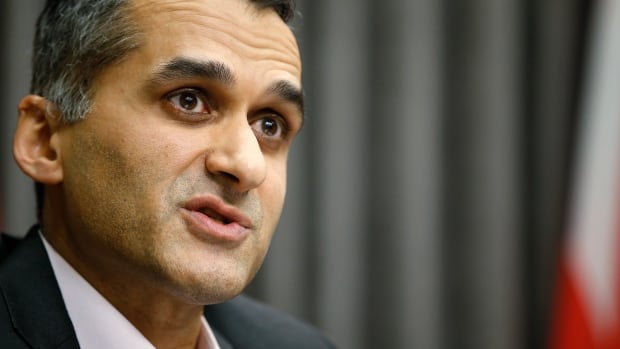 
The last of nearly five dozen COVID-19 patients transported out of the province for intensive care in recent months has been returned to Manitoba as public health officials announced 37 more cases and no new deaths on Monday.

At the height of Wave 3, Manitoba’s health care system was so strained that there was a shortage of intensive care unit beds.

“Obviously it went wrong, we ran out of room here,” Dr. Jazz Atwal, deputy chief public health officer for Manitoba, said at a press conference Monday. “It was a bit unexpected.”

A total of 57 COVID-19 patients requiring intensive care were sent out of the province over the months, most to Ontario. Twelve died outside of Manitoba.

Manitoba’s last ICU patient was referred to Manitoba on Friday, according to the province.

Atwall says Manitoba Shared Health, along with provincial health authorities across the country, are working to build capacity in intensive care, which the pandemic says was unprepared for the types of outbreaks associated with COVID- 19.

WATCH | Atwal addresses the peak of Wave 3 that forced the province to send patients elsewhere:

Manitoba’s Acting Provincial Deputy Chief Public Health Officer Dr Jazz Atwal reflected on the peak of the third wave in the province on Monday and said the relatively higher proportion of patients in need of intensive care in Maintoba by relation to elsewhere was somewhat unexpected. 1:44

Uzoma Asagwara, MPP for Union Station and NDP spokesperson for health and elderly care, said the critical care crisis was the result of cuts to health care before the pandemic.

“It’s hard to listen to anyone at this point in government downplaying their level or responsibility during its pandemic, to act as if they don’t have the expert advice of medical professionals here in our own province to tell them what to do to mitigate a second or third wave, ”they said.

“We have seen the impacts of this failure to act proactively.”

The number of intensive care units is the lowest in months

Atwal also announced that the provincial test positivity rate stood at 3.6 percent for the second day in a row, while the rate in Winnipeg is 3.1 percent.

The number of people hospitalized is down slightly to 117, including 27 in intensive care.

Overall, as of Monday morning, there were 99 intensive care patients in Manitoba hospitals with COVID-19 and other conditions, a spokesperson for Shared Health said.

This is the first time that Manitoba’s intensive care totals have dropped below 100 since May 2, although the spokesperson noted that overall totals remain “well above” intensive care capacity before. the pandemic, which was 72 patients.

Most of the new cases – 21 – were identified in Winnipeg, followed by eight in each of the Southern and Interlake-Eastern health regions. No cases have been reported in Northern and Prairie Mountain Health Regions.

Most hospitalizations among the unvaccinated

The vast majority of recent cases involve people who are not doubly vaccinated, Atwal says.

“The risk of contracting COVID is rare once one is doubly vaxxed,” he said. “It’s not about blaming, it’s about showing the potency of the vaccine.”

WATCH | Atwal on what a post-pandemic Manitoba could look like:

Atwal says about three-quarters of the 35 people hospitalized in the past week had not received their first dose of the vaccine. For the most part, people who receive both doses and exceed the two-week threshold needed to boost immunity do not end up in the hospital, he said.

Manitoba’s seven-day average for daily cases was just above 43 on Monday, the lowest since early October.

This drop coincides with an increase in vaccination rates in recent months. As of Monday morning, 77.6 percent of Manitobans 12 and older had received at least one dose, and 62 percent had received two, according to the provincial vaccine dashboard.

Rates exceeded provincial thresholds related to reopenings recently, allowing most of the remaining businesses and other sectors to reopen on Saturday, with limits. Those who were already open were allowed to increase their capacities. The size of indoor and outdoor gatherings has also increased on public and private properties.

The reopenings were also accompanied by a series of additional privileges for doubly vaccinated Manitobans, who can now dine indoors at restaurants with people outside their homes, and visit movie theaters, casinos, museums, galleries and more.

But rates still vary widely across Manitoba. The Cross Lake Health District, which has the highest participation rate at 90.6%, contrasts with the Districts of Stanley and Winkler at 20.3% and 36.5%, which are among the lowest.

Some jurisdictions around the world are starting to see their COVID-19 cases and hospitalizations increase again and reopening plans threatened due to the worrying delta variant, initially detected in India, which is considered the most contagious to date.

About 450 delta cases have been detected in Manitoba to date, or 2.8% of all variant cases so far, although it appears to have arrived in Manitoba later than some other provinces facing outbreaks.

Manitobans are encouraged to get vaccinated as soon as possible on the provincial vaccine website or by calling 1-844-626-8222.

Those who receive their first dose by August 2 and their second dose by September 6 are automatically entered to win a series of cash prizes or youth scholarships. The province recommends an interval of at least 28 days between the first and second dose.

2 Six Nations Treaty hunters will be punished for hunting in Saskatchewan. unlawfully: Court of Queen’s Bench