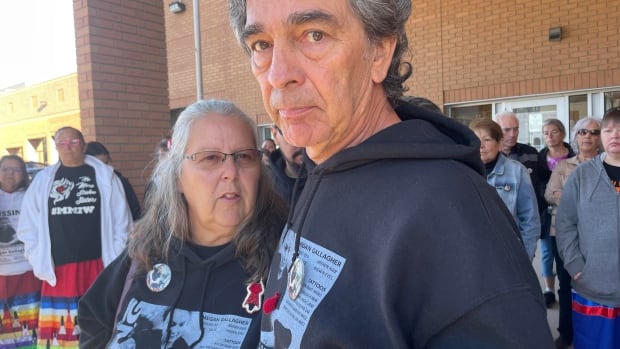 Megan Gallagher’s family went to court in Saskatoon on Monday to see the man accused of killing her.

Instead, Brian Gallagher heard a disembodied voice on the phone.

Bobby James Thomas, 27, is charged with first degree murder in the death of Megan Gallagher. She disappeared on September 19, 2020 in Saskatoon. A year after her disappearance, Saskatoon police said they were treating the case as a homicide.

Outside of court, Brian Gallagher said it has been a long and heartbreaking process since his daughter’s disappearance. Hearing the alleged killer’s voice but not seeing his face and having the charges read out are just the frustrating final steps, he said.

Megan Gallagher’s family and friends wore shirts and pins featuring her likeness. Debbie Gallagher, Megan’s stepmother, wanted Thomas in court to see the picture of the person he is accused of killing.

“Look at Megan’s face and tell us how it doesn’t require you to stay up 24 hours a day like us,” she said.

Gallagher was last seen on September 19, 2020, when she left a friend’s house in western Saskatoon. Her family last saw her the day before, when she was at their farm just outside of town.

A police report was filed on September 30.

Four people arrested in connection with his disappearance are already facing charges of contempt of human remains.

Thomas returns to court on October 6.