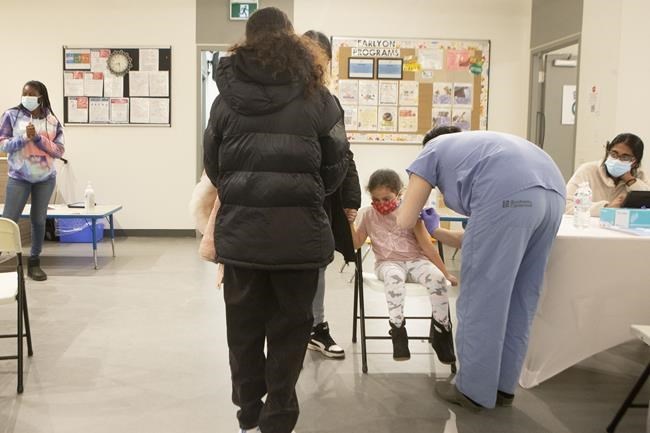 OTTAWA — The first COVID-19 vaccine for infants and very young children is currently under review by Health Canada.

OTTAWA — The first COVID-19 vaccine for infants and very young children is currently under review by Health Canada.

“It’s now in the hands of Health Canada,” she said at an event in Montreal where the company announced plans to build a vaccine production plant.

Health Canada authorized Moderna’s Spikevax vaccine for adults in December 2020, for adolescents in August 2021, and for children ages 6 to 11 in March.

There is no licensed vaccine for children under five. Pfizer-BioNTech’s Comirnaty vaccine can be used on children as young as five years old, but its version for young children has been delayed because two doses did not produce a strong enough immune response.

Data from the addition of a third dose are expected in May.

Moderna on Thursday filed for approval of the vaccine for young children in the United States. The U.S. Food and Drug Administration said Friday it would consider Moderna’s and Pfizer’s applications together, possibly as early as June 8 and through June 22.

Dr. Supriya Sharma, chief medical adviser at Health Canada who oversees the vaccine licensing dossier, said in an interview that she couldn’t set a timeline for Moderna’s review because they haven’t received the submission only since Thursday evening.

She said the application will be analyzed using the same risk-benefit approach applied to licensed vaccines for older age groups.

“We always look at the same components,” she said. “So it’s all about safety, efficiency and quality. These are the same kinds of components that we get for submission, and we’re really looking for benefits that outweigh the risks.”

It took almost three months for Health Canada to authorize the Moderna vaccine for adolescents and almost four months for children aged 6 to 11.

Moderna said a trial in 6,700 children determined the vaccine was safe and produced an antibody response similar to that seen in adults.

A single dose for children under six years old is 25 micrograms, which is one-fourth the size given to adults and adolescents and half the size used for children six to 11 years old.

The request is to administer the vaccine in two doses, four weeks apart.

The trial took place mainly during the wave of the Omicron variant and the vaccine was less effective in preventing infection in children than previous trials in adults.

Vaccine effectiveness against infection in adults also dropped during the Omicron wave, although the vaccine maintained excellent protection against serious illness, hospitalization, and death.

Sharma said it’s true that the risk of serious illness for young children is low, but “it’s not nothing,” which plays into the risk-benefit analysis. About 2% of Canadians hospitalized with COVID-19 are under the age of 11, and some 25 children under the age of 11 have died.

Fourteen of those deaths have occurred since Omicron became dominant and infection rates soared.

Officially, more than 385,000 children under the age of 11 have tested positive for COVID-19, and nearly half of them since Omicron arrived in Canada in late November.

However, most provinces stopped broadly testing children for COVID-19 after the December vacation. Infection rates in recent months are said to be 10 to 25 times higher than those recorded since then.

A study from the Centers for Disease Control in the United States recently reported that approximately 75% of American children had been infected with COVID-19 by the end of February.

Yukon pediatrician Dr. Katharine Smart, president of the Canadian Medical Association, also said you can’t assess the risk for children by comparing it to the risk for adults.

She said COVID-19 poses different risks for many age groups, and you need to look specifically at what’s happening with young children. On that front, she said COVID-19 is one of the biggest disease risks facing children right now.

“The message that it’s important for parents to understand is being given at this time how infectious Omicron is and how quickly it spreads your child will encounter Omicron,” she said. “It’s just a matter of when. So the decision, I think, for a parent is: Do you want him to meet Omicron vaccinated or not? Because he’s going to meet him.”

This report from The Canadian Press was first published on April 29, 2022.