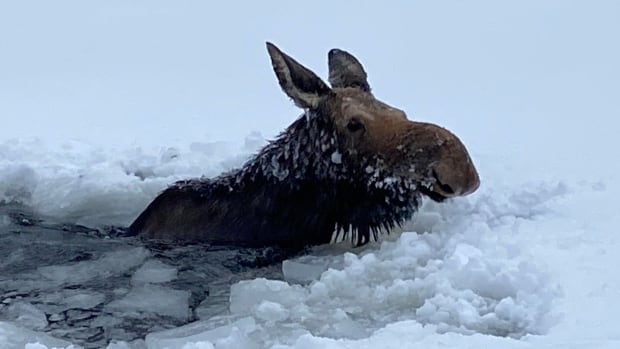 A moose is very lucky to be alive after falling through the ice earlier this week.

Holbik, speaking to CBC News on Wednesday after sharing video of the encounter on social media, said he heard Whalley on the radio say there was a moose in the water.

Holbik had seen the same female moose with a calf earlier in the day in the area near a bridge at the top of Lake Windigoostigwan, which is more than 100 kilometers west of Thunder Bay.

Holbik said the moose had been in the water for hours and sometimes rested its head on the ice to rest. He said the water was about five meters deep and the moose couldn’t touch it.

“Darren was already there and he had a little plan,” Holbik said. “He thought we could make a channel in the ice and then use the poles to guide it.”

The men pulled out straps, in case they had to drag the moose, and Holbik had a chainsaw to cut through the ice.

Initially they started to dig a channel to the shore, but they measured with a pole and it was too deep.

“So we decided to dig a channel to the river where the ice was thinner and shallower,” Holbik said. “It was only about three feet of water.”

After the channel was cut and broken with a sledgehammer, the men used long wooden poles and gently nudged the moose towards the shallow area.

The moose would stop occasionally, then continue swimming closer to the shallow water.

Eventually the moose found the bottom and started walking through the water towards the ice edge.

“In the video, you can see that she ends up standing and then falling on the ice,” Holbik said. “Then she was able to catch her breath.”

Holbik said the moose lay motionless on the ice for five or six minutes, before making that final push to freedom.

He said the moose’s hind legs fell into the water because the ice broke under her and she started to move again.

Holbik said the moose appeared to be able to move back down the channel into deep water, so he took evasive action.

“I had to get really close to her and get her to go to the north shore,” he said. “She got up and stood there and gave us a beautiful look.”

Holbik said they also saw the cow’s tracks in the road the day after the rescue and were optimistic she was fine and hopefully reunited with her calf.

He said that everyone involved in the rescue never thought twice about it.