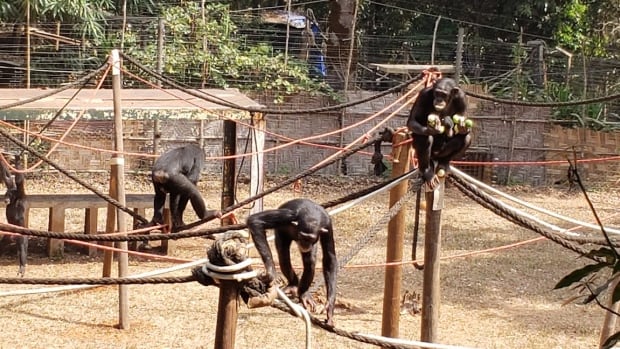 Spending the day at a chimpanzee sanctuary in Sierra Leone is not something one would expect to do in the Royal Canadian Navy.

But that’s exactly where Cmdr. Daniel Rice and some of his crew reunited earlier this month.

“It was one of those unique experiences,” Rice said when reached by satellite phone on HMCS Goose Bay off the coast of Nigeria.

The crew of the coastal defense vessel truly lives the old adage “Join the Navy, See the World,” Rice said.

“It’s a bit unusual for us, we often support local school children,” he said, usually by fixing buildings or donating needed supplies.

Rice said part of the navy’s role in this three-month tour of West Africa is to strengthen diplomatic relations with the countries it visits, supporting the work of Global Affairs Canada.

Known as Operation Projection, the crews of HMCS Goose Bay and HMCS Moncton were invited to visit the Tacugama Chimpanzee Sanctuary in Freetown, Sierra Leone.

At least the Valentine’s Day visit started out as a simple invitation, but Rice said the shrine staff had a follow-up question.

The crews of HMCS Goose Bay and HMCS Moncton fashioned a new playground at the Tacugama Chimpanzee Sanctuary in Sierra Leone and received the chimpanzees’ approval. 1:22

“You must have a rope that is useless?

The sanctuary is home to hundreds of chimpanzees, Sierra Leone’s national animal, and the playground for the newer residents needed updating.

“As you can imagine, chimpanzees can be pretty tough on things,” Rice said.

In this case, HMCS Oriole, a training sailboat that operates out of Halifax, home port of HMCS Goose Bay and HMCS Moncton, had just had its entire rigging replaced.

“So we were able to bring over 350 feet of rope with us to Sierra Leone,” Rice said.

The opportunity to visit the sanctuary was popular with its crew, but with strict COVID-19 protocols in place, the sanctuary could only allow 10 crew members to participate to protect staff and chimpanzees from illness.

“When we arrived we all had to do a quick test and our temperatures were taken,” Rice said, adding that all the crew on board were fully vaccinated.

Beyond the challenges of COVID-19, a crew used to the weather of Atlantic Canada also had to deal with the heat of Africa in February.

“Lots of water, lots of sunscreen, lots of bug spray,” Rice said, admitting there aren’t many complaints about 30C temperatures this time of year.

It took just over two hours for the crew and sanctuary staff to replace the poles and thread the new ropes, while the chimpanzees watched from nearby enclosures.

“They knew something was wrong.”

The Canadians could see the reaction when the chimpanzees were allowed into the new play area, and from the hoots and squeals, they seem to appreciate the effort.

“One of them came over and gave us what looked like a boost,” Rice said.

“It was really interesting to see our closest relatives up close.”

Rice said many young women in the country can miss 25% of the school year simply because they don’t have access to menstrual products.

This three-month deployment has already taken the ships to Côte d’Ivoire, Sierra Leone and Nigeria.

They have also planned stops in Ghana and Senegal before returning home to Halifax in mid-April.

“We spent last August and September in the Arctic,” Rice said. “So the joke on board is, ‘We had winter in summer, so now we have summer in winter.’

“Hopefully when we get home in April the snow will be gone.”

The high cost of rare diseases in Newfoundland and Labrador