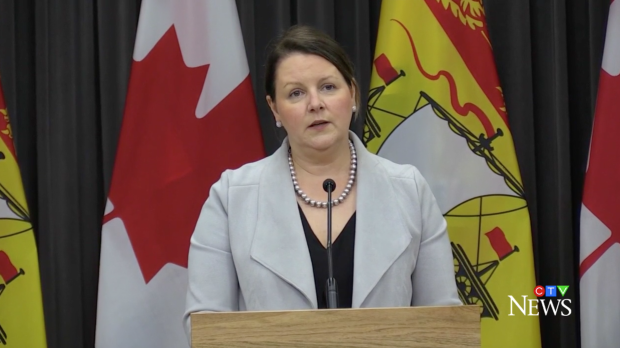 HALIFAX – New Brunswick will return to a state of emergency as the province continues to tackle the growing fourth wave of COVID-19, officials said on Friday.

â€œThe situation we are currently facing in New Brunswick is indeed serious. That is why, on the advice of public health, the cabinet is reestablishing a state of emergency and issuing a binding order starting at 11:59 pm tonight, â€Premier Blaine Higgs said.

During Friday’s update, Higgs announced that the following restrictions will be in place starting at 11:59 p.m. Friday.

All previously announced public health measures remain in place. The following additional measures will be implemented within the framework of the mandatory decree:

Places of worship have the option of ensuring that all participants present full proof of vaccination or of implementing the following measures:

â€œIt is unfortunate to return to a state of emergency, however, it is necessary,â€ Higgs said. “We need to slow the spread of COVID-19 and ensure that the number of hospitalizations does not continue to increase.”

Higgs also announced that in the future the province will return to a state of emergency at any time, more than 25 people will be hospitalized in the province.

Higgs said there are currently 31 people in hospital, including 15 patients in an intensive care unit. Of the 31 patients, 27 or 87% are not fully vaccinated.

â€œWe knew there would be more cases of COVID-19 after the mandatory order was lifted at the end of July. But the pace of this fourth wave is exceeding what we expected, â€added Dr. Jennifer Russell, New Brunswick’s Chief Medical Officer of Health in Friday’s update.

Russell says that last week the province had an average of 67 new cases per day, with hospital admissions increasing by an average of one patient per day.

â€œIt is clear that our current situation is very serious,â€ said Russell. â€œThroughout the COVID-19 pandemic, we have acted to protect New Brunswickers. We have also taken action to preserve the health care system on which we all depend. We have not hesitated to take action to limit the spread of this virus, and we will not hesitate now. “

New Brunswick health officials reported three COVID-19-related deaths on Friday, bringing the total number of people who have died from the virus to 52.

Russell also announced a single-day record of 78 new cases on Friday, as well as 76 recoveries, as the province’s active number of cases stands at 573.

According to health officials, 59 of the 78 new cases as of Friday, or 76%, are not fully immunized.

â€œIf you are still not vaccinated, you may think that this disease will not affect you because of your age or your current health. But the biggest risk affects us all equally, and that is the risk COVID-19 presents to our health care system, â€said Russell.

In a technical briefing on Friday, Horizon Health Network’s senior infectious disease specialist said the province was wrong when the decision was made to lift all health protection measures on July 30. .

“All of us in this room right now, with the evidence for this rapid rise in Delta virus in the province, we will all agree that was not the right decision to make,” Dr Gordon Dow said at the technical briefing. Friday.

Dow says senior health officials in the province can all agree that it was a mistake to lift all restrictions when there was ample evidence at the time to suggest that the rapid spread of the highly contagious Delta variant would envelop the province by fall.

New Brunswick recorded 866 cases this month, nearly a quarter of the total reported since the pandemic began in March 2020.

Dr Mathieu Chalifoux also said more than 85 percent of cases in September were linked to the Delta variant.

Three cases are under investigation, three are contacts of previously confirmed cases and two are travel-related cases.

Three cases are under investigation and three are contacts of previously confirmed cases.

Twenty-eight new cases have been reported in the Fredericton area (Zone 3) involving:

Sixteen cases are under investigation and 12 are contacts of previously confirmed cases.

Thirteen cases are under investigation and nine are contacts of previously confirmed cases.

Thirteen new cases have been reported in the Campbellton area (zone 5) involving:

Eight cases are under investigation and five are contacts of previously confirmed cases.

A new case has been reported in the Miramichi area (Zone 7), involving a person in their 60s, which is under investigation.

New Brunswick has recorded 3,707 cumulative cases of COVID-19 since the start of the pandemic.

A total of 3,081 people have recovered and 52 people have died in the province from COVID-19.

Public health says a total of 448,802 COVID-19 tests have been processed since the start of the pandemic.

The number of cases is distributed according to the seven health zones of New Brunswick:

As of Thursday, 78.6 percent of New Brunswickers aged 12 and over were fully immunized and 87.4 percent had received their first dose of a COVID-19 vaccine.

A total of 1,155,893 doses of vaccine were administered in New Brunswick.

All eligible New Brunswickers can make an appointment now for their second dose for a date that is at least 28 days after their first dose.

Anyone showing symptoms of the virus, as well as anyone who has been to the site of a possible public exhibition, is invited to request a test online or to call Tele-Care at 811 for an appointment.

This is a developing story and will be updated.

What you need to know about COVID-19 in Ottawa on Friday, September 24