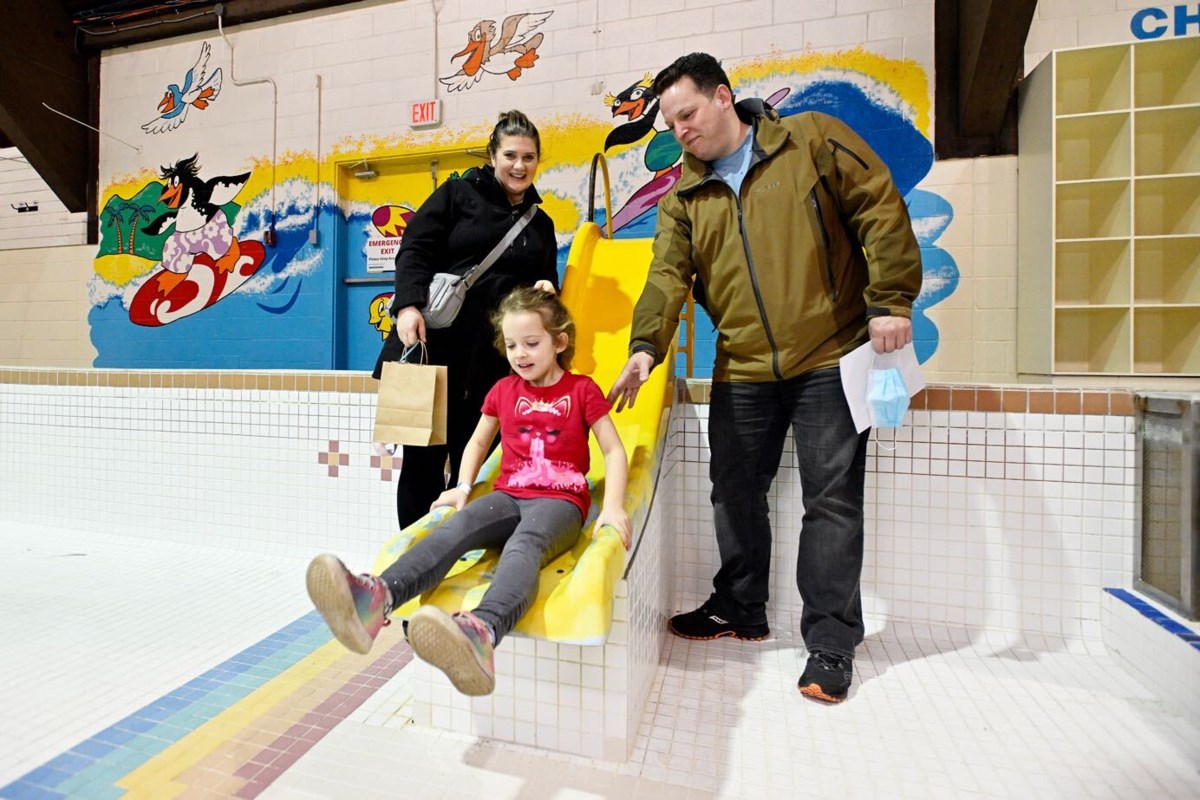 Souvenir kiosks, souvenirs and a last visit to the swimming pool are among the pleasures of the day

Learning to swim, falling in love, finding a sense of community in a new homeland and spending time with friends – these are some of the reasons why hundreds of people came to the Canada Games pool over the weekend. end for the Canada Games farewell pool party.

More than 800 people accepted the City of New Westminster’s offer to visit the popular facility one last time. Soon, the city will hand over the keys to the contractor who will oversee the construction of the new təməsew̓txʷ aquatic and community center and the demolition of the Canada Games pool.

“Lots of memories,” said Mumtaz Jamal. “You don’t want to miss it.”

Jamal recalled many family visits to the pool after moving to the neighborhood 35 years ago, sitting in the bleachers while her children played in the pool. On Sundays, they were part of a group of friends who met for an afternoon of fun at the pool.

Al Jamal joined his mother and other family members at the February 12 farewell celebration. As a kid growing up in the neighborhood, he said the pool was where the neighborhood kids hang out, and the gym became his go-to spot from the 8th grade.

“When you’re a kid looking for adventure, do you want to go swimming at 6:30 in the morning? Are you kidding? Little children hate getting up. I hated getting up but when you came here the vibe was so good. We started working,” he said. “It started a good fitness habit.”

Angela Lee, who participated in parent and baby water aerobics classes with her then-baby, attended the farewell event with her 13-year-old daughter, Aimee Parent.

Gabriel Del Cid Castro used to attend the Canada Games pool as part of some swimming and athletics classes he was taking at Douglas College.

“Especially as a new immigrant, it was a community place,” he recalls. “Everyone here was so friendly. It was great.”

Renee Chadwick, the town’s special projects and community partnerships manager, said it’s heartwarming to hear people’s memories of their time at the pool, like the couple who met in the pool a while ago. 35 years old (and later married). Two fellow students thought about how they visited the pool every morning, sat in the shallow pool, and thought about how they would solve all the problems in the world.

“It was emotional, exciting,” said Dean Gibson, director of parks and recreation for the city. “The thing that’s been missing is there’s no feeling of sadness. There’s just the emotional aspect that you think about. It’s impacted people in different ways. .

It all started with an idea

Among those invited to a VIP tour of the Canada Games pool ahead of Saturday’s public event was the couple who pitched the idea of ​​building a facility and teaming up with New West and Burnaby to host the Canada Summer Games – Don and Evelyn Benson. The idea came to Don when he was appointed as the British Columbia delegate to attend the first Canada Summer Games in Halifax and Dartmouth, Nova Scotia in the summer of 1969.

“Without Don and Evelyn Benson, this facility would probably never have existed,” Gibson said. “They had four generations of the Benson family with them. They had great-grandchildren, grandchildren, and his children were all there. Of course, it wasn’t the whole family, but it was representative. I could see the feeling of pride. And of their children and grandchildren – “oh, grandma and grandpa did something special.” It was good to recognize them.

Built in 1972 for the 1973 Canada Summer Games, the pool was, at the time, one of the largest in the country. More than 26 million people have visited the pool over its 48-year history, with approximately 1,500 people visiting the facility daily and an average of 10,000 students taking swimming lessons each year.

Given these numbers, it’s no surprise that the time slots for the farewell event filled up quickly.

“It filled up in 24 hours,” said Lisa Kemp, the city’s special events program coordinator. “And then we added extra spaces – twice.”

Former Canada Games pool staff were also invited to return for a visit, with around 40 people taking a guided tour of their former playground and sharing stories of their time at the pool. It also allowed current staff to hear some of the stories of staff who worked at the pool in the 1970s, 1980s and 1990s.

At Saturday’s event, visitors followed a designated route that began at reception, went upstairs to the fitness room (which has hosted a number of weightlifting champions over the years) and descended down to the pool deck. Along the way, they could stop at four souvenir tables, where they could pick up items like rubber duckies with the Canada Games pool logo, and two photo booths, including one in the wading pool.

One of the photo stations was in the mezzanine fitness area, overlooking the pool. Fitness equipment is being moved to the Centennial Community Center gymnasium this week, before finding a new home at the təməsew̓txʷ Aquatic and Community Center when it opens in late 2023.

Gibson said the new facility will feature different areas for fitness activities, including a space with pool views.

“Cardio equipment – ​​treadmills, bikes and so on – will always be in an area where they have a view of the pool. There is a long hallway along the pool on the second level,” he noted. “Unlike this setup, it will be in a separate air-conditioned environment. So those who hated the hot experience will love the new setup; those who really liked it will likely find the new setup perhaps a bit more conventional.

The Təməsew̓txʷ Aquatic and Community Center will include a 50-metre eight-lane swimming pool, a recreational pool with a lazy river, hot pools and a tot area, as well as a fitness centre, two gymnasiums, multipurpose rooms and community gathering spaces.

The new pool will not have a waterslide because it was not considered a priority during the public engagement process for the new facility, Gibson said.

“In 1984 when we installed the first waterslide it was called the Lightning Shute waterslide. Then it was replaced in 2008 with what we see today which is the Green Thunder waterslide which originally was the longest indoor waterslide in British Columbia,” he said. “I don’t know if that’s still a title we hold.”

If you haven’t jumped into the pool from the 10-meter tower, you’ve missed your chance because the new facility’s diving boards are no higher than 5 meters.

Gibson said the 10-meter tower was included in the Canada Games pool because it was built for the national sporting event. Because the new facility is not intended to be an international competition venue, he said there was no justification for building a taller tower.

“It would have been part of international diving standards at the time,” he said. “I learned…that in the early years after this facility opened and after the Summer Games were held, the Canada Games pool was actually a hotbed of national and international competition, both for swimming and diving, but also for water polo. What has happened, over time, is that the various national and international standards have changed and evolved, as they do, so this installation has fallen into disuse in this area as new pools have arrived.

As other pools opened elsewhere in the area, CGP pool staff found ways to help transition the facility from a competition site to a community facility. A ‘fun supervisor’ position has been created to engage children in the pool, through activities such as creating a giant hot tub in the shallow end and setting up mats, zip lines, swings and other activities – which were new to swimming pools at the time.

“They kind of had their birthplace here,” Gibson said, “and we made the concept of a leisure pool out of it.”

Since the pool opened in 1973, the Canada Games pool has served as the home base for the Hyack Swim Club. The club has produced 11 Olympians who have swum and trained in the pool, including two swimmers who won Olympic bronze medals (Shannon Smith in 1976 and Pamela Rai in 1984).

The Təməsew̓txʷ Aquatic and Community Center will include a 50-metre eight-lane pool with a removable partition, which is well suited for training and hosting localized swimming competitions, but not for larger competitions such as national championships, said Gibson.

“The new facility will allow them to operate in much the same way as at the Canada Games pool,” Gibson said.

End of an era

Although it was not visible to those in attendance at Saturday’s farewell event, work is already underway to permanently close the gates to the Canada Games pool. The city does not have a date when the building will be demolished, but it will hand over control of the facility to contractors in the coming weeks.

“We are currently at a phase where we are removing any equipment that we can reuse in our new facility or that we can use in the months in between,” Gibson said. “The fitness room will be moved to the community center next week, most of it.”

Movable items were always envisioned for relocation to the new facility, but permanent structures, such as the Canada Games Pool’s 40,000-square-foot timber roof decking and 11 laminated timber ceiling beams- glued, were not incorporated into the design – as CGP was supposed to close on a Friday and the təməsew̓txʷ Aquatic and Community Center was supposed to open on a Monday.

“Of course, modern deconstruction standards would require all of that wood material to be salvaged,” Gibson said. “It would be up to the company that is carrying out the demolition itself. There is a certain value in this material.

Originally meant to stay open until the təməsew̓txʷ aquatic and community center opens in 2023, the city decided to permanently close the facility after a pool tank leak was discovered and a room flooded. mechanical.

During the farewell event, the city provided information about the new təməsew̓txʷ aquatic and community center and gave attendees the chance to participate in two art projects, such as decorating tiles with messages related to their memories. of Canada Games Pool.

“We’re going to get an artist to put it together,” Chadwick said, “and we’re going to hang it in the community center or include it in some way.”