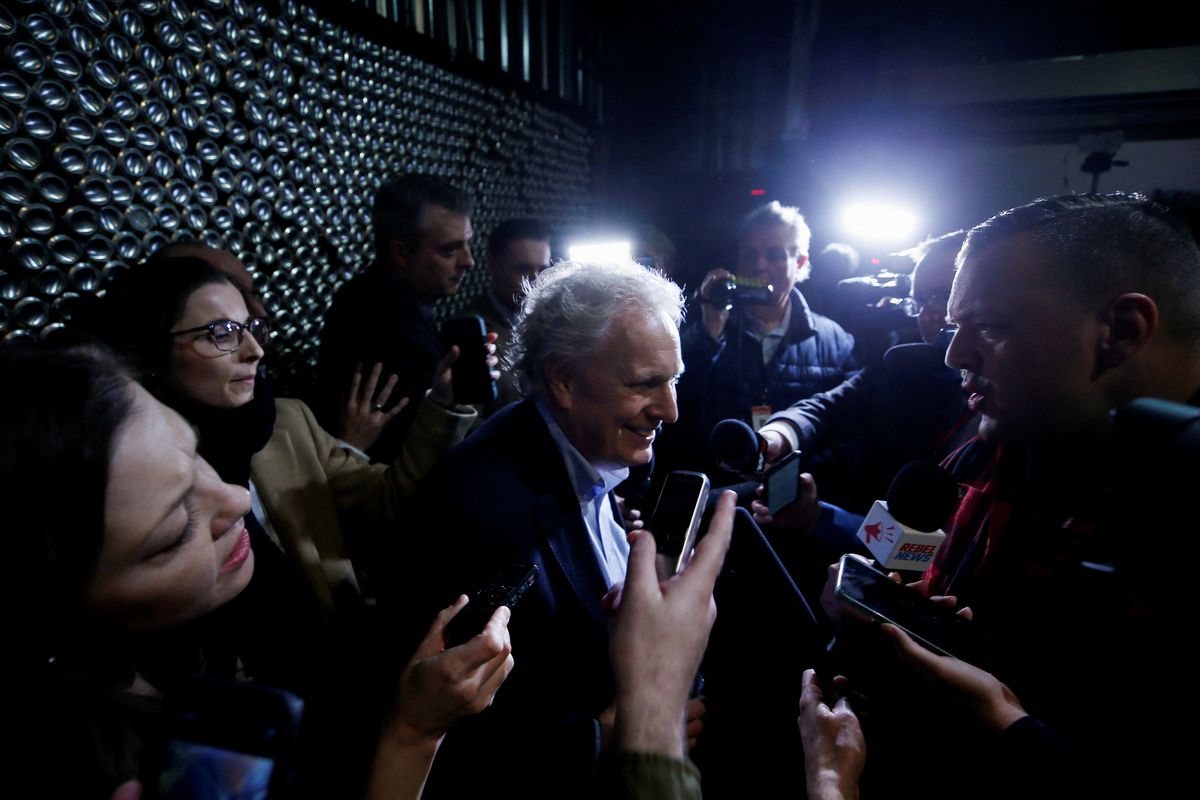 With a wall of carefully placed beer cans as a backdrop, Jean Charest has outlined his energy policy if he becomes the next federal Conservative leader. It’s a plan he clearly sees as acceptable to both the Alberta public he was addressing this week and a broader group of Canadian voters.

Mr. Charest gave just a 14-minute speech at an ultra-casual leadership launch with a party atmosphere in the garage at Calgary’s Wild Rose Brewery late Thursday night. But half of that airtime was spent on topics the Alberta public needs to know all about: pipeline development, the role of Canadian oil and gas in a world where energy security has taken on new implications, and policies for reducing and pricing greenhouse gas emissions.

“I’m not going into this leadership contest just suddenly finding out about the oil and gas industry. I’m not entering this race by suddenly discovering Alberta,” he said.

“I am very determined to design a policy that will be good and that will deal with the transition.”

Jean Charest is against blockades by truckers. Will he clash with the conservative mood?

Who is running to be the next leader of the Conservative Party of Canada? Candidates and dates to watch

The emphasis placed by Mr. Charest on these sometimes conflicting subjects shows the delicate balance he must strike. His ability to convince people on both energy and climate is key to any political success he hopes to find in the September leadership vote – especially as he challenges Pierre Poilievre, the first race participant whose no-frills social media messaging is easy to remember. : cancel the carbon tax and abandon Justin Trudeau’s “anti-energy laws”.

In a message to The Globe and Mail on Friday evening, Mr. Poilievre said: “I am for more Canadian energy projects, more pipelines and more Canadian oil and gas. We need to produce more Canadian energy to end the world’s dependence on dictators like [Vladimir] Putin. And unlike Mr. Trudeau, Mr. Charest and [Patrick] Brown, I would scrap the carbon tax and fight the inflation that is driving up gas prices in Canada.

As Premier of Quebec, he introduced a cap and trade system and makes no secret of the fact that he still believes in a “smart” national carbon pricing system that is not a “tax on Wealth Transfers,” with more details to come. But he asked the brewing crowd (presumably bearing in mind the current strong demand/high prices for gasoline and other fuels), if the planned increase in the national carbon price on April 1st was logic. “Obviously not,” was his own response.

“This terrible, terrible war,” he added, referring to Russia’s invasion of Ukraine, means governments must pay attention to “security of energy supply.”

He also said he would scrap two Trudeau-era laws: one banning tanker traffic off the north coast of British Columbia and the other setting a higher bar for environmental reviews of large projects, including pipelines, which critics say make construction nearly impossible. new infrastructure.

Mr. Charest also suggested that he would push for pipeline development in provinces (his being the best example) with little appetite for new oil and gas pipelines.

“I can come to Alberta and tell you I’m in favor of pipelines, and you’ll agree, I’m sure,” he told the audience.

“But wouldn’t it have been good for a Prime Minister of Canada to say, as I did, that he is in favor of pipelines where it counts and where it makes a difference, in the regions of the countries that need to know why pipelines matter?”

He also suggested that he would use a holistic view of energy development. “We need a very, very comprehensive approach that includes policies that will promote economic growth and that make sense on their own – carbon capture and storage, blue hydrogen, green hydrogen, small modular reactors. Hydroelectricity, of course, is one of them. And biofuels,” Mr. Charest told reporters.

Mr. Charest jumped straight into the Conservative Party’s toughest political discussion – the future of Canadian oil and gas production and its national climate policies. The party’s strong base in Alberta and Saskatchewan, where commodities are king and concerns about global competitors are high, means the debate over carbon pricing or climate policy is far from settled.

At the same time, Mr. Charest and others believe that strong environmental policies that appeal to the whole country are absolutely necessary to form government. It’s a minefield in Canada, which is often divided into regions where people live who identify as oil and natural gas producers and others who don’t.

The launch of Mr. Charest’s campaign contrasted markedly with that of Erin O’Toole, the fallen Conservative leader. Mr. O’Toole also started in Calgary, in January 2020 – but at the private Ranchmen’s Club. And despite speaking directly to the city’s energy elite and telling them of his opposition to the carbon tax, Mr. O’Toole ultimately lost his footing on the issue. Some Tories saw his plan in April 2021 to move to a system of mandatory carbon levies to be deposited in savings accounts for the personal use of Canadians as a departure from his original position.

Mr. Charest, at least in his early days, seems more sure of his convictions on energy, climate and carbon pricing.

At the root of any Alberta resentment is the widely held belief that the Liberal federal government has few of the prairie region’s economic problems at heart. It is often overlooked that Alberta and Saskatchewan would bear the brunt of the economic fallout and job losses as the country transitions to a low-carbon economy. Mr. Charest spoke directly about this anxiety, saying his goal is to form a national government where Alberta would not be “on the outside”.

He said he would do this by uniting the “fractured” Conservative Party and then spend two years preparing for an election. And then, at the brewery, Mr. Charest said something else that is music to the ears of Albertan Conservatives.

“And I guarantee you that if there’s one thing that I know – that I learned in politics – I know how to win.”