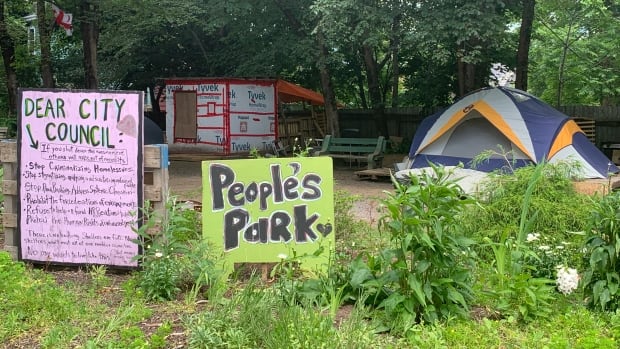 Halifax issued a notice on Tuesday telling people living in tents and other small wooden structures in a western park to leave.

The Halifax Regional Municipality has announced that Meagher Park will be immediately closed for reconstruction and restoration work. People living there have until July 17 to leave.

There are several tents and a few buildings set up in the park which has been one of the focal points of the city’s fight against homelessness over the past year.

City staff distributed the notices to the park on Tuesday, noting that deteriorating “health and safety conditions” over the past few months prompted the move.

Officials say there are alternatives to sleeping in Meagher Park as the municipality recently designated four outdoor shelters in the area that are equipped with portable toilets and trash cans. Drinking water, storage boxes and needle boxes will continue to be added to sites.

Alternate locations are located in a green space on Barrington Street, between Cornwallis and North Streets, and Lower Flinn Park in Halifax; also two green spaces in Dartmouth on Geary Street and Green Road Park.

Failure to remove tents and buildings from Meagher Park while it is being restored to its original condition could result in arrest or a fine of up to $10,000, officials say.

“The municipality’s priority has been and continues to be to treat homeless people with dignity and to continue to find ways to provide support…within the capacity and reach of our organization,” the statement reads. announcement on Tuesday.