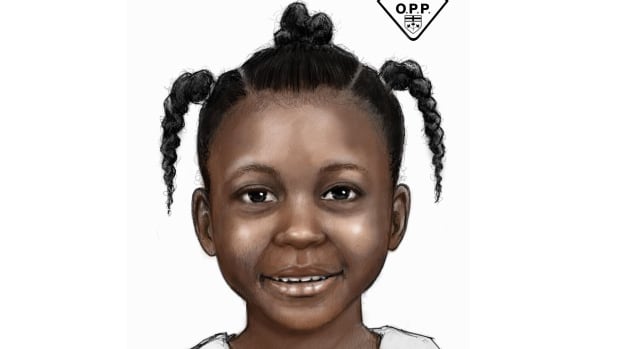 Toronto police released a composite sketch of a little girl whose body was found in a dumpster in an upscale neighborhood a month ago.

Police also released a photo of a vehicle of interest, described as a dark colored Porsche Cayenne SUV, dating from 2011 to 2014, according to a press release.

Insp. Hank Idsinga told reporters the vehicle was captured on video in daylight, stopping in the dumpster area at 10:26 p.m. on April 28.

‘This car is captured on Dale Avenue around the time we believe the body was dumped there, and inexplicably stops right next to the dumpster for 21 seconds,’ he said during an interview. ‘a press conference. “So, of course, we want to identify this car.”

WATCH: Toronto police provide update on girl whose body was found in dumpster:

Insp. Hank Idsinga, head of the Toronto Police Homicide Unit, said investigators conducted a Canada-wide scan to identify potential matches of missing children. None had evidence related to this case.

A criminologist at Western University in London, Ont., says that while the car may not be “as glamorous” as a track, it could actually become “meaningful”.

“So basically pulling the records for every vehicle of that make and model and color over a period of years and then narrowing down the potential license plates, which then leads to potential home addresses when the vehicles have been registered.”

Arntfield says that while it doesn’t appear to be the case at the moment, “it’s a solvable case.”

Idsinga said the Ontario Center for Missing Persons conducted a quick scan to identify potential matches based on criteria from the province’s coroner and forensic pathology department.

The analysis identified 58 missing children’s cases across Canada for investigation, but investigators have no evidence linking the girl to any of those cases.

Investigators do not believe the girl was ever reported missing to police in Canada, Idsinga said, but cannot rule out the possibility that she may have been reported missing in another country.

“That research and that part of the investigation is still ongoing. What I focused on was specifically the Ontario database, which includes everyone across Canada.”

Police are asking the public to help identify the girl

Idsinga also said people should keep in mind that the skin tone in the photo posted on Tuesday is an approximation and may not be completely accurate.

“But if there’s just one thing the designer absolutely nailed in his sketch that would trigger anyone’s memory or thought, that’s all we need – to motivate someone to call and say, ‘I think I know who that girl is,’ he said.

“Please call us and help us.”

The composite sketches were made by an OPP forensic artist who provides service to the coroner’s office, according to police.

Police were called to the scene in the area of ​​Castle Frank Road and Dale Avenue, north of Bloor Street East on May 2 at around 4.45pm.

This is where they say the girl’s body was found wrapped in a crocheted blanket inside a plastic bag, wrapped in a colorful blanket.

Investigators have previously released images of these two pieces of fabric in the hope that someone can recognize them and help identify the girl.

The posting of the images “generated a lot of tips,” from people who thought they knew who the cover belonged to, Idsinga said. Investigators followed all the advice they received, he added.

Cause of death still unknown

Police described the girl as black, three feet six inches tall, with curly hair cut into four short ponytails, two of which were braided and tied with black and blue rubber bands.

Police believe she is between four and seven years old, adding that she had all her teeth when her body was found.

A post-mortem examination was carried out last month, but medical examiners have not yet determined the cause of death, police said.

Investigators believe the remains were left in the area between 12 p.m. April 28 and 4:45 p.m. May 2. However, they say the girl could be dead as early as summer or fall 2021, or earlier.