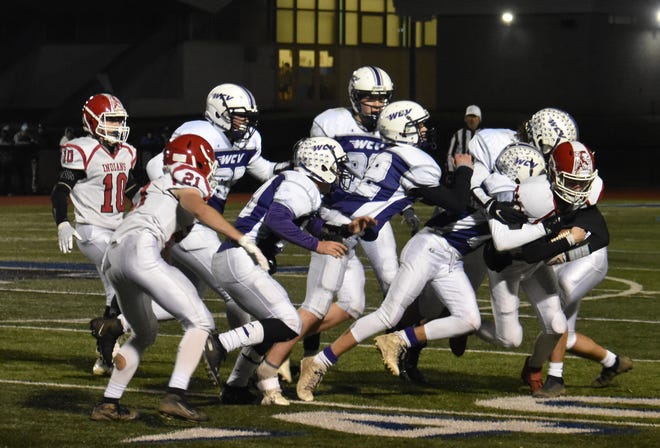 While securing the victory, Red Jackets head coach Josh Henninger said the team were just happy to have the opportunity to play in the regional game.

“We’ve been taken out of a few games this season due to quarantine and the teams haven’t faced us. We just want to play, that’s all we want to do and we’re just happy to be on the pitch. . “

West Canada Valley (8-2) kicked off the first drive of the game. From there, the two teams wasted no time getting on the set.

After gaining the upper hand on his own 21-yard line, Red Jacket (10-0) roamed the field and took a 6-0 lead when Mason Pollot scored on a direct 12-yard snap.

On the second play of the next command for Red Jacket, James Sibeto’s pass to Daltyn Hanline totaled 55 yards for the go-ahead score. Parker Moore would add the two-point conversion to give Red Jacket a 14-6 lead.

Red Jacket was without starting quarterback Kyle DaMore, his Section Championship MVP, but Red Jacket didn’t miss a beat with the quarterback sidelined.

“Kyle (DaMore) is a fantastic player – Section V player of the year, the section’s best offensive player – but we have other guys who just step up when their number is called,” Henninger said. . “(Dalton Hanline), Mason (Pollot), Parker (Moore), all these seniors … are absolutely fantastic, they are so selfless and they just come to play and that’s what they did today. “

After making the score quick, West Canada Valley responded with another kick return score. This time it was Sean Burdick running 75 yards in the end zone. The two-run try was not good, leaving West Canada Valley behind 14-12 with 5:09 left in the first half.

From there, Hanline and Red Jacket took control of the half-time. Hanline would score two more rushing touchdowns and record two interceptions, one of which he was coming back for a touchdown to help give the team a 40-12 lead before halftime.

Hanline continued his hot streak early in the second half when he scored a run from the three-yard line to give his team a 46-12 lead.

Faced with its biggest deficit of the season, West Canada Valley refused to leave quietly. Halfway through the third quarter, Shepardson joined Burdick for a 47-yard touchdown pass to reduce the lead to 46-18.

“The two (Shepardson and Burdick) are rookies to the team,” said West Canada Valley head coach Todd Hobin. What a pleasure to see them come and play. They are very athletic, any sport they play will be exceptional. We were very lucky that they chose to spend the fall with us. “

For West Canada Valley, that would be as close as the Indians would get before Red Jacket added two more points to go on and win the 59-18 regional championship game.

“It was a pleasure working with these young men,” Hobin said after the loss. “It’s fun to watch them grow up and form a team, they really support each other, they had a lot of fun.”

Now that the team has enjoyed a regional championship, Hobin says the new normal is set in the West Canada Valley.

“One of the things I posted on my wall is a checkbox. The first thing was the Dome, checked; the section III championship, checked; then I noted the champions of the region. So now we’ve set the bar, now we know what we have to work hard to get. “

Kenny Lacy is a sports reporter for the Observer-Dispatch. Email Kenny Lacy at [email protected]

People of Saskatchewan: An Ode to the New Prairie Nation