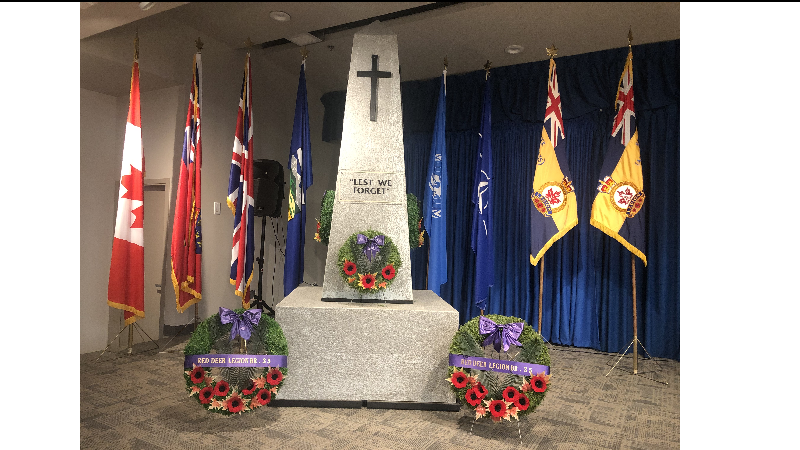 At the same time, an open-air service will also be held at the downtown cenotaph, where the Red Deer Regiment will remember fallen soldiers.

In Rocky Mountain House, a virtual ceremony will be held on Remembrance Day at 10:50 am by Branch # 8 of the Royal Canadian Legion. The in-person event will be for guest veterans, executive members and dignitaries. Wreaths can be purchased in advance from the Legion and placed in the Cenotaph upon request.

In Innisfail, Royal Canadian Legion Branch 104 will hold an outdoor ceremony on November 11 at 10:45 a.m., walking to the cenotaph to lay wreaths. It will be streamed live on their Facebook and website. Their Club room will be open to members and the adult public after the ceremony at 1pm, where a live performance will be given by the group “Walking on Sunshine”. Proof of vaccination or a negative COVID-19 test result after 72 hours will be required.

In Old, there will be a service on November 11 at 10:15 am in the Legion Auditorium at the Royal Canadian Legion # 105. Due to limited space, those wishing to attend must pre-register by calling the Legion at 403-556-6406 or emailing [email protected] The event can also be streamed live on their Facebook page. The restriction exemption program will be in place for attendees and refreshments will be available in the lounge after the service.

In Sylvan Lake, The Royal Canadian Legion Branch 212 and the Town will hold a Remembrance Day service together at 10:30 a.m. and broadcast it live on the Town’s website. The live ceremony is by invitation and will consist of approximately 70 veterans. There will then be an outdoor public service scheduled at the Cenotaph at 2 p.m., where many guests will also be present such as standard bearers, trumpeters, government officials, Legion officials and military officials. The Legion will be open to visitors during the day from 10 a.m. to 4 p.m. in accordance with Alberta Health regulations. The Poppy Campaign also collected donations at 20 stores across town and hosted a drive-thru donation event on November 6 at the nearby Legion parking lot.

In Lacombe, Legion Branch # 79 will be hosting an outdoor service on Remembrance Day at 10:30 a.m. at Lest We Forget Park located outside the Lacombe Memorial Center. Up to 200 people can attend, as regulated by Alberta Health, but those returning to Legion’s Lounge will need to go through the restriction exemption program. Although they will not be hosting live ceremonies at local schools, they have hoisted the Veterans Voice of Canada’s Remembrance flags outside the Pentagon Farm Center. A new annual city tradition since September, the flags will be lowered on November 12 at 10 a.m., and the city is asking all volunteers to help if they are available.

In Ponoka, an interior service will be held for veterans, dignitaries and members of the legion only on November 11 at the veterans memorial auditorium # 66 of the Royal Canadian Legion. The doors will open at 10:15 am but the ceremony will start at 10:45 am and will be webcast live on their Facebook page. The restriction waiver program will be in effect for participants and while there will be no outdoor parade or social function afterwards, donations are always welcome to support veterans programs and of the Legion.

In Blackfalds, no service will be organized by the Blackfalds Ministerial Society due to the provincial state of emergency. However, the City encourages citizens to pay homage to the monument to veterans at the Abbey Center.

In Bowden, as the city does not have a legion or cenotaph, they ask citizens to attend ceremonies in nearby towns like Innisfail and Olds.

In Stettler, The Royal Canadian Legion Branch # 59 will host an open-air ceremony for up to 200 people on November 11 at 10:45 a.m. at Sharpe’s Memorial Park, starting with two minutes of silence. With the Poppy Campaign currently receiving donations, the Legion is also open November 8-10 for wreath sales and new or renewed memberships.