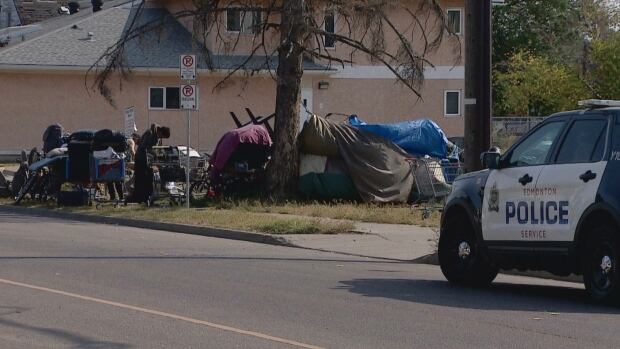 The city of Edmonton’s approach to dealing with homeless encampments this year is pushing social disorder into new neighborhoods and to new levels, according to business leaders and residents.

Michael Shandro, general manager of the Best Western Plus City Center Inn on 113th Avenue and 109th Street, said every day that his employees have problems with people who are not customers.

“Every day I receive reports of verbal or physical attacks,” he said of his staff. “People who refuse to leave.

Shandro said his staff discovered people who weren’t hotel guests drinking in the hallway, and others were setting up camps along the side of the hostel.

“Before, it was like we had an incident every week or two, we would talk about it, deal with it and that was it,” he said. “My staff are getting jaded.”

Ellie Sasseville, executive director of the Kingsway District Association, said she’s noticed more camps in the area, including one recently behind the 118th Avenue building.

She said they paid $700 for cleaners to haul out trash and debris left behind by campers last week and companies shouldn’t have to.

In May, city police and peacekeepers began to refocus patrols in Chinatown, downtown and Edmonton transit after two men were killed in Chinatown.

Since then, smaller camps have sprung up beyond the central core in places like Kingsway, along 107th Avenue and Whyte Avenue.

Mayor Amarjeet Sohi said he heard the concerns of business leaders and residents.

“The problems are spilling over into neighboring communities,” Sohi told CBC News.

“It will also help neighboring communities, so hopefully it works,” he said. “But we know law enforcement is a band-aid solution.”

However, he believes the increased police presence in Chinatown, where there is usually a lot of social disorder, has helped make the neighborhood safer.

“There’s been a lot of crime, the community has suffered a lot, you know, from a lot of encampments,” Pasma said in an interview last week.

“We think it’s safer,” he said. “There are still a lot of problems to solve. So it’s really a band-aid solution. I think everyone knows that, but it’s at least a step in the right direction.”

The number of people identifying as homeless has doubled since the start of the COVID-19 pandemic.

More than 2,750 people lack permanent housing and nearly 1,300 people sleep outdoors or in shelters each night, according to the city and housing agency Homeward Trust.

The city developed a new encampment strategy last year, with response teams made up of social workers, police and cleanup crews from city peace officers.

Last Thursday, the city’s encampment response teams dismantled a camp of at least 20 tents at 96th Street and 106th Avenue.

Barb Laidlow, a resident who has lived across the street for 15 years, said she had complained about the social disorder more than two weeks earlier.

“It’s been the worst year it’s been for the camps,” Laidlow said. “It’s very exhausting. We are still filing 311 complaints for drug use, waste and stolen property.”

The city’s new approach to camp management stems from preventing huge encampment like Camp Pekiwewin in the Rossdale neighborhood and Peace Camp in Old Strathcona in the summer and fall of 2020.

Pasma said the large encampments pose a safety risk to the general public, first responders and people living in the tent city, where there is exploitation, drug use and crime.

“A lot of effort has gone into making sure these encampments don’t grow exponentially to a point where we can’t control it anymore,” Pasma said.

The city, social agencies, agencies and the province are still working on a plan to create more winter shelter spaces, but they don’t know where it will be.

Last winter, the Spectrum building at the Northlands property at 118th Avenue and Commonwealth Stadium was used as temporary emergency shelters, but the city said neither site is likely to be used this year.

In 2020, the Edmonton Convention Center was the designated 24/7 shelter during the first winter of the COVID-19 pandemic.

“I think there is urgency,” Pasma said. “I think everyone working in the industry and in funding is aware of the urgency.”

It is a challenge to find temporary spaces, staff and the logistics of setting up and operating an emergency shelter, Pasma noted.

“As soon as we can have something in place, the better.”

Sohi said he hopes the province will find funding for winter shelter spaces and then longer-term housing solutions for more of Edmonton’s homeless population.