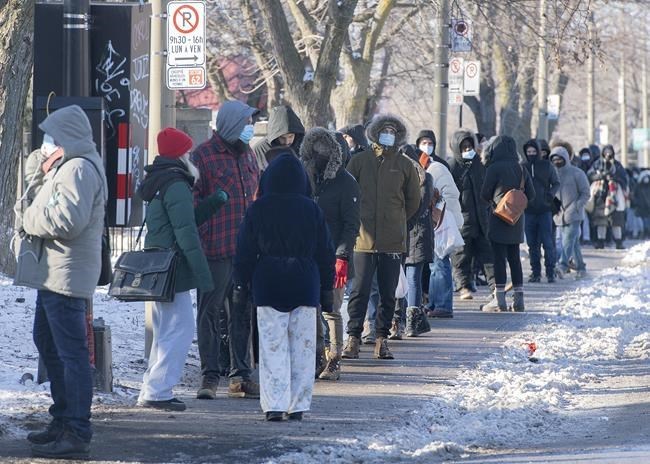 Quebec reported a record number of COVID-19 cases on Tuesday, as a large hospital network in Toronto halted non-essential care and surgery as the highly transmissible variant of Omicron washes across the country.

Quebec reported a record number of COVID-19 cases on Tuesday, as a large hospital network in Toronto halted non-essential care and surgery as the highly transmissible variant of Omicron washes across the country.

Governments across the country have taken steps to try to stem the number of cases and mitigate the impact of Omicron.

In Montreal, Mayor Valérie Plante reintroduced a state of emergency as the number of active cases of COVID-19 climbed to more than 8,000 in the city.

Ontario announced 3,453 new COVID-19 cases and 11 deaths as some health units struggled to keep up with contact tracing and testing efforts amid high demand.

The Unity Health network, which operates three hospitals in Toronto, said it had made the “difficult decision” to suspend ambulatory care and non-essential surgical procedures, except for urgent cases.

Stricter visitation policies have also been introduced at several Ontario hospitals, while inpatients staying less than seven days will not be allowed to receive visits.

Omicron has far surpassed the growing wave of infections in the province, even for those vaccinated with the two COVID-19 vaccines. In Ontario, it is estimated that Omicron accounted for about 88% of cases on Tuesday.

In response to the variant threat, Ontario and Alberta are stepping up their booster doses for all adults.

Alberta Premier Jason Kenney has said anyone 18 and over can book a third shot as long as the second took place more than five months ago.

Ontario opened eligibility to everyone who received their second dose three months ago starting this week.

Ottawa Public Health has asked residents who have symptoms but cannot access a timely test to assume they are infected and self-isolate.

Prince Edward Island has joined with Newfoundland and Labrador in announcing isolation requirements for all visitors to limit the spread of COVID-19 and the Omicron variant.

Prince Edward Island Premier Dennis King said every traveler entering the province will undergo two rapid tests and will have to pass them on the second and fourth days of their isolation. The province also introduced more restrictions with bars and restaurants shutting down customer service at 11 p.m.

“To get back to some kind of normalcy in our province, we have to do it,” King said.

Capacity restrictions have also been imposed on certain businesses, entertainment venues and social gatherings in Ontario and Manitoba as well as in some other provinces.

This report by The Canadian Press was first published on December 21, 2021.

‘There is a lot of anxiety’: US grapples with Covid testing amid wave | US News