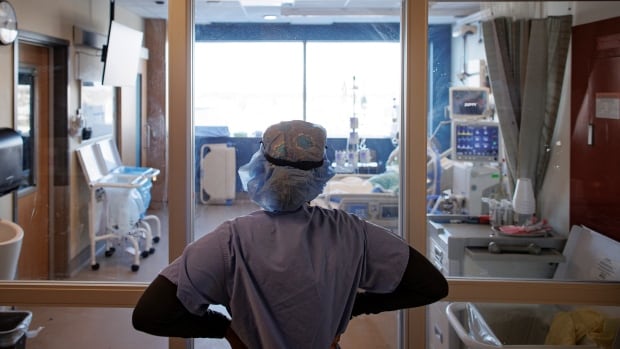 The number of people hospitalized with COVID-19 set a new record for the third day in a row on the same day the Manitoba government announced it was preparing to relax the province’s pandemic health orders.

Seven more people in Manitoba have died from the coronavirus, and there are 744 people with COVID-19 in Manitoba hospitals on Wednesday, up seven from Tuesday.

Despite the rise in numbers, Dr Brent Roussin, the provincial chief public health officer, said last week that modeling showed the Omicron wave may have peaked.

“We ran these models again and they’re showing us the same thing this week – that we’ve most likely peaked in cases, most likely peaked in hospital admissions and we’re either peaking or peaking soon. regarding intensive care admissions,” he told a news conference. Wednesday, where he and Prime Minister Heather Stefanson announced that some public health restrictions would be eased in the coming days.

“So we have a better understanding of where we are in this wave.”

Regarding the number of COVID-19 hospitalizations, Roussin repeated the assertion of public health officials that approximately two-thirds of those hospitalized who test positive for the virus are there for reasons unrelated to the virus. sickness.

“It’s certainly relevant to us that 60% of the people there are there regardless of COVID,” Roussin said.

This approach of distinguishing between hospital cases has been criticized by doctors, who say it is not straightforward to make these distinctions when underlying health conditions may be aggravated by the infection.

Manitoba experienced its third deadliest month of the pandemic in January and has the second highest death rate of any Canadian province.

“Are we comparing apples to apples? ” she said.

“The deaths have been very difficult, and to minimize anyone’s loss in this pandemic in any way is just disgusting,” he said.

NDP Leader Wab Kinew called Stefanson’s comments “bizarre” and said easing restrictions at a time when the province is still seeing a spike in hospitalizations could further strain the health care system.

“January was the month with the most deaths since vaccines were widely available…hospitalizations are up again. People are still getting sick, so we’re not off the hook yet,” he said. .

The majority of cases in intensive care because of the virus

The number of COVID-19 patients in intensive care units fell by two to 54, while the total number of all patients in ICUs, including non-COVID patients, fell by four to 110 from this which had been a fourth wave high on Tuesday.

Unlike hospital cases, Roussin said the majority — around 70% — of ICU patients are there because of COVID-19.

Deaths announced Wednesday include four people from Winnipeg: a man and a woman in their 60s and two women in their 40s, one of whom is linked to the outbreak in River Park Gardens.

The other deaths reported Wednesday are people from the Northern Health Region: a man in his 50s, another in his 60s and a woman in her 80s, the statement said.

The province also reported seven COVID-19-related deaths on the provincial data dashboard on Tuesday, all of which were identified as people from the Winnipeg health region.

Those deaths include three women in the 1980s, one of whom was linked to the outbreak at Actionmarguerite St. Joseph. Other deaths reported that day included four men: one in their 80s and three in their 90s, the statement said.

Provincial labs performed 1,926 PCR tests on Tuesday. PCR testing has been limited to certain people and rapid test results, which are more widely available, are not tracked by Manitoba Health.

Lab tests confirmed 526 new cases of COVID-19 on Wednesday, but that’s thought to be a significant undercount of coronavirus cases due to PCR testing limitations.

As of Wednesday, 85.7% of eligible Manitobans had received at least one dose of a COVID-19 vaccine, 79.7% had received two doses and 40.6% had received a booster shot, according to the provincial website. .

Manitoba COVID-19 enforcement officers have handed out dozens of tickets for various pandemic health order violations over the past few weeks.

From January 24 to 30, a total of 41 tickets were issued, including 37 tickets of $298 for not wearing a mask in an indoor location. There was a ticket to an individual for $1,296 and a ticket for $8,550 for violating federal quarantine law.

Outbreaks have been declared at:

The following outbreaks have been declared over: