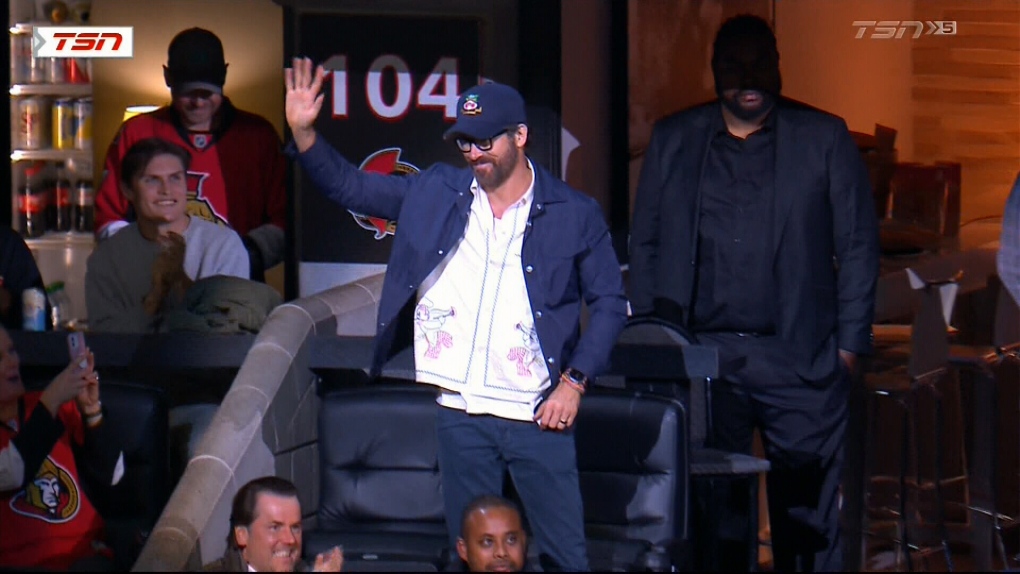 Canadian actor Ryan Reynolds was at the Canadian Tire Center on Tuesday night.

He waved to the crowd from a private suite on the 100 level when he was introduced during the first period of the game between the Ottawa Senators and Vancouver Canucks. Reynolds received a standing ovation from the crowd and Senators players during a first-period stoppage.

Ryan Reynolds is at the Canadian Tire Center tonight! pic.twitter.com/dHXKUZ5fOR

It comes a night after Reynolds confirmed his interest in owning the team while he was The Tonight Show Starring Jimmy Fallon.

“I’m trying to do that,” Reynolds said after Fallon asked if he hoped to own the franchise. “It’s very expensive. I need a partner with deep enough pockets.”

Reynolds also spoke to Fallon about his close connection to the capital.

“I love Ottawa,” he said. “I spent a lot of time in Vanier, which is a small town inside Ottawa.”

Several Canadian Tire Center fans say his presence at the game and the speculation surrounding it has gotten them excited about the team’s future.

“Everyone would like to represent the Senators more, that’s for sure,” said Erika Roberts.

“A Canadian, a great guy, does a lot for the community, has ties to Ottawa, donates to the food bank, what more could you ask for?” said Canucks fan Kyler Stark.

But TSN hockey contributor Bruce Garrioch was more interested in the people he attended the game with.

“I believe Ryan Reynolds is surrounded by bankers tonight. Some of those bankers are from Inner Circle Sports who made the deal he made with Wrexham AFC, the football club he bought in the Land of Wales,” Garrioch told TSN on the Senators show. “What’s interesting about Inner Circle Sports is that they represented Eugene Melnyk in his refinancing of this team in 2013.”

With a background in sports franchise ownership, many are wondering if Reynolds could be part of the next group that manages the Ottawa Senators.

The Senators confirmed last week that the organization was for sale following the death of longtime owner Eugene Melnyk on the condition that the team remain in Ottawa.

In addition to the excitement surrounding Reynolds on Tuesday, Senators fans were also treated to a surprise involving former player Chris Neil.

The team announced that the former Senators assistant captain will have his number 25 retired by the Senators on Friday, Feb. 17.

In a statement, Ottawa Senators president of business operations Anthony LeBlanc wrote, “Chris Neil was and is everything you would want an Ottawa senator to be.

“While his success on the ice has made him one of this franchise’s most beloved players, his work in the community, both as a player and after his career, has created a unique legacy. His impact on this city is a model for players across the National Hockey League. »