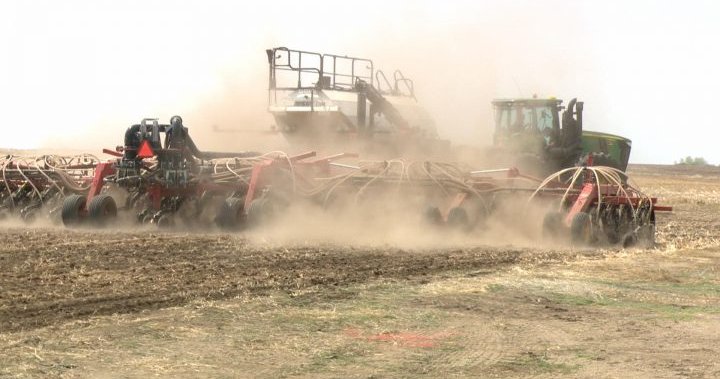 
With nearly 75% of the 2021 crop in the soil, Saskatchewan Agriculture says precipitation is needed to improve soil moisture conditions.

The weekly crop report released Thursday says 74 percent of the crop is seeded, well ahead of the five-year average of 48 percent for this time of year.

Minimal rain and good weather across the province allowed growers to plant without any prolonged delays, said Sask Ag.

Rainfall forecast for Saskatchewan does not match drought

However, the agency said soil moisture conditions deteriorated last week due to limited rainfall as well as hot and windy conditions.

The topsoil moisture of cropland is estimated to be 48 percent short, 32 percent very short and only 20 percent adequate.

The topsoil moisture in haylands and pastures is rated 36% short, 50% very short, and 13% adequate.

“It would now take many, many rainy days to soak up the soils to replenish them,” Pomeroy told Global News.

“There is no part of the province, except perhaps Cypress Hills, which has normal soil moisture conditions and normal precipitation.”

Parts of the province have received rainfall over the past seven days, with the Tisdale area receiving 25 centimeters due to a thunderstorm.

Sask Ag said some farmers have stopped planting canola while waiting for rainfall, while others have chosen to plant wheat or other grains instead.

The crop report indicates that crop germination was poor and uneven in areas that received little rainfall.

– with files from Anna McMillan

Soil conditions deteriorate across Saskatchewan as spring planting continues – May 13, 2021