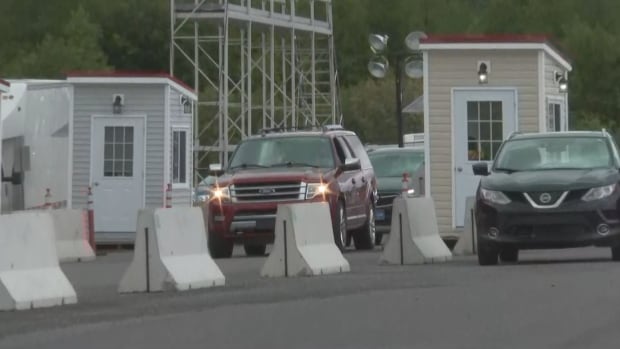 Some cross the border to return home, others “just for fun” on the first day of phase 2


Jocelyne Johnson was eager to enjoy the freedom of simply being able to cross the New Brunswick-Quebec border on Thursday.

On the first day New Brunswickers were allowed to do so, Johnson and her husband, George Johnson, got into their car from their home in Sainte-Basile – just outside of Edmundston – and drove across to in Dégelis, Quebec.

“Just for the freedom – just for fun, because we were doing this all the time. When there is something that you are not allowed to do, you miss it.”

As part of its “green road,” New Brunswick entered its Phase 2 of easing restrictions on Thursday, which includes free movement within the province from the Atlantic provinces, as well as free movement. into the province from the rest of Canada as long as travelers complete a travel registration form and receive at least their first dose of vaccine.

Although the Johnsons have only driven a few miles outside of New Brunswick, Jocelyne said the freedom is exciting as they can eventually go visit their daughter and grandsons who live in Quebec.

For Jacques Eelaney, the easing of restrictions meant an easier road trip to his home in the Magdalen Islands.

Before Thursday, Eelaney said he should have driven from Quebec to Souris, Prince Edward Island, to take the ferry to the islands.

But with the restrictions relaxed, he was able to modify his move plan to allow for an overnight pit stop in Shediac.

“Wonderful,” Eelaney said of the new rules. “Because we don’t have to cross New Brunswick and Prince Edward Island and all the way to Souris. We can stop and like to stop in Shediac every now and then. “

Eelaney said he also has family in New Brunswick that he hasn’t seen for two years and that he hopes to visit them now that he can.

“It will be very pleasant.

Moving to a new home and province can be stressful, but Thursday’s new rules made that a little less important for Hervé Pasquier and Veerle Debets.

The two entered New Brunswick as part of their move from Petawawa, Ontario to Oromocto.

“It was a bit of a relief because now we don’t have to isolate ourselves, which makes our move a lot easier… with the movers so that they don’t have to wait two weeks to deliver our furniture”, said Pasquier, member of the Canadian Armed Forces.

“On the contrary, it will help us get comfortable in our new home and sort out our move and do all the paperwork like changing our license plates and changing our address. So that’s good.”