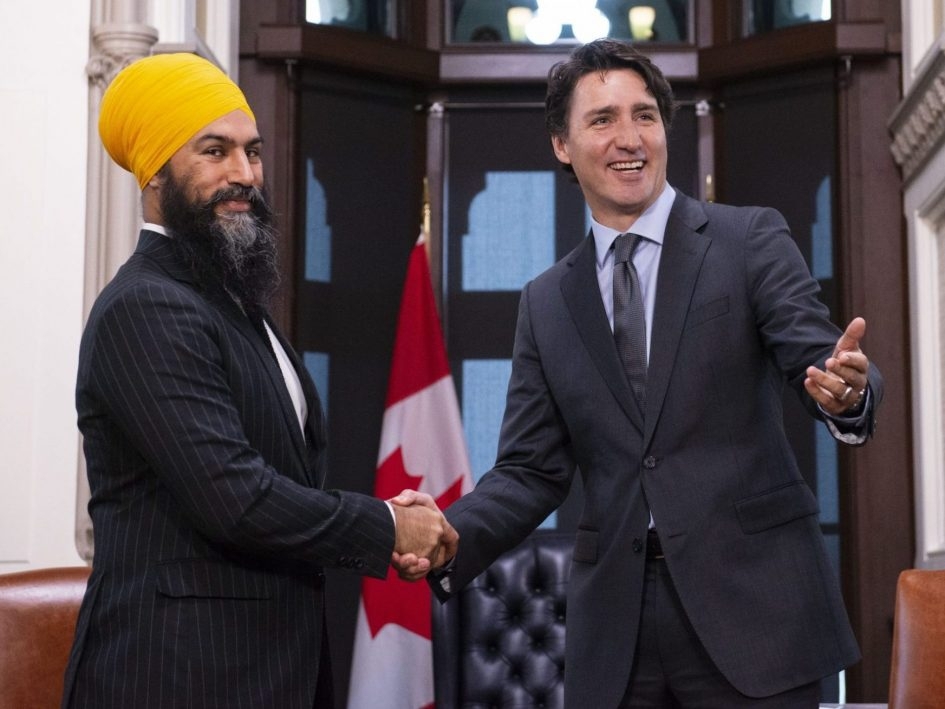 Politicians working together, regardless of party, benefit Canadians.

The recent deal between the Liberals and the NDP has sparked outrage, support and, in some cases, feelings of betrayal. A recent Ipsos poll indicates that 51% of Canadians feel the deal is a betrayal of NDP and Liberal voters.

However, that same poll indicates that a majority (63%) of Canadians support the Liberal-NDP deal, which provides parliamentary support for the Grits until 2025. It allows the NDP to advance some of its key priorities, such as an income program, dental care and housing.

Four in 10 Canadians oppose the deal, as many Conservative and Bloc voters are unhappy with this “coalition.”

Could this arrangement be called a coalition? Of course, if it’s easier to call it that, I’m not going to stop you. Although many would argue that is not the case, as there are no NDP MPs in the Prime Minister’s Office. Why do we have to associate the word “coalition” with bad things, anyway? A coalition government is not some creepy boogeyman waiting in the closet trying to ruin your life.

According to this Ipsos poll, 52% of Canadians believe that this arrangement between the NDP and the Liberals will improve the functioning of Parliament. However, about 43% of those living in the prairie provinces of Saskatchewan, Manitoba and Alberta are not so optimistic.

Interestingly, Manitoba has had more coalition governments than any other province in Canada. It was a coalition that gave birth to the Manitoba Liberal Party in the 1930s. Then, in 1940, all of Manitoba’s political parties joined in a nonpartisan administration in response to World War II.

Can you imagine this happening nowadays in response to the COVID-19 pandemic? It would certainly have been interesting to see NDP Leader Wab Kinew, Liberal Leader Dougald Lamont and former Prime Minister Brian Pallister rubbing shoulders to get things done.

One would suspect that the lack of support in the Prairies is because there are a lot of Conservative seats and many Conservatives are the ones unhappy with this deal. Conservatives should probably worry about keeping a leader for more than one election cycle.

Acting Conservative leader Candice Bergen called the deal “backdoor socialism”. The use of the word “socialism” would certainly enrage some of the less informed conservative supporters. Again, using “socialism” as some sort of negative thing is kind of fun, considering Canada has many policies that would be considered socialist (see, universal health care).

If you don’t agree with this Liberal-NDP deal, that’s fine, but can we agree that we can thank Justin Trudeau and Jagmeet Singh for not kicking us out in another election? It’s good to know that we will have some consistency on Parliament Hill for a few more years.

It seems that in today’s age of partisan politics, it is forbidden to agree with a government’s decision or policy. Politicians of all persuasions throw mud at each other and spend most of their time attacking and criticizing rather than governing. Granted, that’s what most people see, anyway.

Despite the cynicism in me to the contrary, politicians are working in our halls of power across Canada to improve the lives of all of us. Each party has a different way of getting to that place to make life better, but they do. At least we can only hope they will.

This Liberal-NDP government is good for democracy and shows that our elected officials are not just partisan hacks who are too proud not to work together.

Sign up to receive daily news from the Winnipeg SUN, a division of Postmedia Network Inc.

The next edition of the Winnipeg Sun’s Daily Headline News will soon be in your inbox.