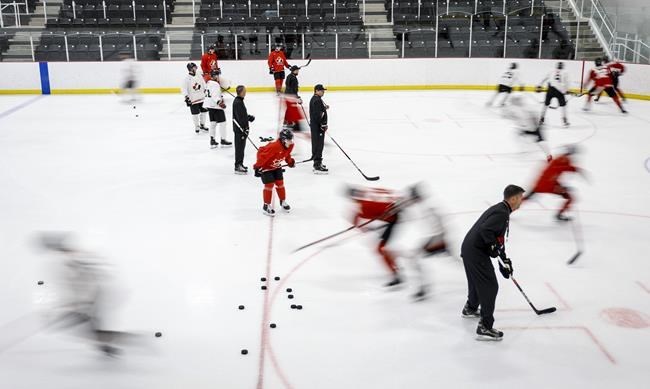 CALGARY — Team Canada began preparations for the 2.0 edition of the 2022 World Junior Men’s Hockey Championship in Edmonton on Tuesday. The host nation kicks off the August 9-20 championship on August 10 against Latvia at Rogers Place.

CALGARY — Team Canada began preparations for the 2.0 edition of the 2022 World Junior Men’s Hockey Championship in Edmonton on Tuesday.

The host nation kicks off the August 9-20 championship on August 10 against Latvia at Rogers Place.

The 10-nation tournament will be minus Russia banned from participation by the International Ice Hockey Federation due to that country’s invasion of Ukraine.

The original 2022 championship in Edmonton and Red Deer, Alta., was canceled Dec. 29 after just four days due to rising COVID-19 cases among players and officials, which forced the forfeits of matches.

Hockey Canada hosts this world juniors under the shadow of federal government scrutiny and an outpouring of public criticism for its handling of alleged sexual assaults by members of previous junior men’s teams in 2018 and 2003.

Sheldon Kennedy, former NHL player and victims’ rights advocate, is among those calling for the resignation of Hockey Canada president Scott Smith and the board of directors.

Enhanced character scouting for all high-level players was part of a list of remedies Hockey Canada announced in an action plan last month.

“We definitely have a big weight on our shoulders,” said forward Mason McTavish, who was named Canada’s captain Tuesday as camp opened in Calgary.

“We have an opportunity, not obviously to clear the name, but maybe help improve and bring back…this is Canada and the world junior championships are such a great event for Canadians in particular . We have a great opportunity to…help improve and take another step towards getting back to where we were.”

The 25 players named to the junior roster on Monday participated in a code of conduct seminar that evening, presented by Hockey Canada director of sport safety Natasha Johnston.

Another session on sexual violence led by the Calgary Communities Against Sexual Abuse was scheduled for Tuesday.

“It’s obviously something very serious,” said forward Kent Johnson. “You are playing for the nation and all the kids at home are watching. I think it’s always an honor to represent your country.”

The IIHF Men’s Under-20 event is considered a showcase of the best male under-19 hockey talent on the planet.

The IIHF allowed players born in 2002 who turned 20 to remain eligible to participate in the summer revamp.

Cameron returns as Canada’s head coach in a different scenario with no selection camp and a major championship to play in mid-summer after a short camp.

“A little weird to be honest with you,” Cameron said at the Tsuut’ina Nation’s 7 Chiefs Sportsplex. “Two good things about it for me is that I don’t have to fire anyone. That’s the hardest part of this job when you have to send kids home. And the second part is that I know the bulk of the players.”

The goaltending trio of Dylan Garand, Sebastian Cossa and Brett Brochu are back, but the roster has undergone nine player changes from December’s roster.

Regina Pats forward Connor Bedard, the first overall pick in the 2023 NHL Draft, and Olympic Men’s Team forwards McTavish and Johnson are the headliners for Canada’s forwards in Edmonton.

“We only have eight days to prepare, which is a little less than usual,” Bedard said. “I think everyone comes in with the mindset of trying to win a gold medal. We’re doing everything we can in training and in the gym these first few days to start that goal.”

Jack Thompson, who sat out of December’s selection camp due to the COVID-19 quarantine, and Daemon Hunt were added to the August roster on defense.

Cameron would not comment on the players who withdrew.

“I just focus on the guys I have here,” he said.

Garand is the only returning player from the Canadian team that won world junior silver in Edmonton in 2021.

“There’s a bit more attention on the tournament this year being sort of the first world junior since the allegations and all that,” Garand said.

“For us and our team, we’re just here to focus on hockey and ultimately winning a gold medal is our goal.”

This report from The Canadian Press was first published on August 2, 2022.