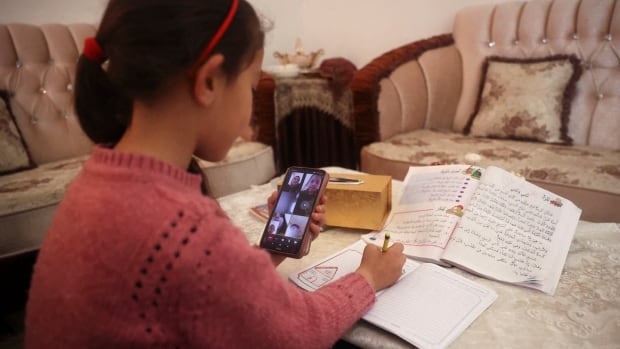 The latest on the coronavirus outbreak for February 3

On Thursday, Prime Minister Justin Trudeau again expressed his disinterest in meeting personally with protesters demonstrating in Ottawa or negotiating with their leaders through his government.

The protest, now nearly a week old, began in opposition to the federal government’s vaccination mandate for cross-border truckers. It has since expanded into a movement against broader public health measures to limit the spread of COVID-19, including provincial vaccine mandates, masks and restrictions.

A press release issued Wednesday by some senior convoy leaders said that while the protesters sympathize with the plight of local residents, they plan to stay in Ottawa “as long as it takes.” One organizing group, Canada Unity, is demanding that government leaders revoke mandates or “immediately resign from their lawful positions of authority.”

Trudeau said that in terms of negotiating with anyone, the subject of vaccination mandates was actually settled by the outcome of the federal election in September.

“That’s the decision Canadians made in the last election, voting for parties that supported those mandates,” he said during a virtual press conference Thursday. “So having a group of people who disagree with the outcome of an election, who want to go a different route and put in place an alternative government, is a no-start in an accountable democracy.”

While the Liberals have announced their intention to make vaccinations mandatory for federal workers and for those who travel in any part of the federally regulated transportation sector before the election, plans for a mandate for the trucking industry were not revealed until November. At that time, all Canadian truckers seeking to cross the border from the United States were advised to be vaccinated by Jan. 22 to avoid a 14-day quarantine.

Ottawa Police Chief Peter Sloly said Wednesday the city is considering various options to end the disruption caused by the convoy protest to residents, but suggested at one point there may be no “no police solution to this”.

Federal officials reacted Thursday to some confusion stemming from Sloly’s press conference, saying there is currently no role for the military in the dispute. The suggestion seemed to enliven and irritate several American conservative pundits, who followed the Canadian protest.

Daniel Minden, spokesperson for Defense Minister Anita Anand, told CBC News Wednesday night that the Canadian Armed Forces are not involved in law enforcement in Ottawa and have no intention of s ‘involve.

Trudeau said Thursday that a military intervention “is not being contemplated at this time.”

“You have to be very, very careful before deploying military forces in situations involving Canadians,” Trudeau said Thursday. “It’s not something anyone should enter lightly.”

As the 2022 Beijing Olympics begin, China has doubled down on its zero-COVID strategy, attempting to eradicate any outbreak as soon as it occurs, often resorting to extreme measures. 2:49

Why the pundits hit Saskatchewan. vaccines do not protect against

Premier Scott Moe’s recent statement that vaccines no longer prevent the transmission of COVID-19 continues to reverberate in Saskatchewan.

Moe first made the comments in a statement over the weekend regarding the pandemic protest in Ottawa and expanded on them Monday at a news conference.

“The bottom line of all of this is that vaccines work, but they no longer work to prevent transmission in this wave of COVID 19, as they did before in the Delta wave at which they were quite effective,” said Moe.

Experts say that while the Omicron variant has demonstrated a degree of vaccine evasion never seen before in the pandemic, that doesn’t mean the shots are completely ineffective at preventing transmission. In addition, multiple studies demonstrated that boosters provided long-lasting protection in the prevention of serious illness or hospitalization, even in the face of Omicron.

“He’s spouting nonsense,” said Nazeem Muhajarine, a professor of epidemiology at the University of Saskatchewan.

At the heart of the Prime Minister’s apparent misunderstanding is a similar total number of unvaccinated and vaccinated people who contract COVID-19.

“The new cases we have in this province are about the same in vaccinated and unvaccinated people here in Saskatchewan,” Moe said.

The Prime Minister’s decision to consider the data only as whole numbers is what experts commonly call a base rate error, as he ignores the respective denominators of unvaccinated and vaccinated.

Also, looking at apartment numbers without regard to age provides a limited view. Inoculation rates generally increase with each age cohort; in other words, several hospitalizations of unvaccinated people under the age of 65 could very well have been avoided with doses of the vaccine.

Still, the Saskatchewan government says it’s ready to align the approach to COVID-19 with that of other communicable diseases like the flu. On Thursday, the province announced it would soon end its longstanding practice of providing daily COVID-19 data.

Instead, the province will release weekly epidemiological reports on COVID-19 on Thursdays. The weekly data will include new laboratory-confirmed cases, deaths, tests and vaccination information in the province and by health zone.

Hospitalizations and ICU numbers have not been included in the list of information that will be provided. It was not immediately clear if this data would no longer be shared with the public. A request for clarification from the Ministry of Health was not available at the time of this writing.

It’s a philosophical approach that Saskatchewan has already tried once, as has Alberta, in the summer of 2021. But the Delta wave quickly hit both provinces hard, and Saskatchewan had its deadliest month ever. the pandemic in October, with 156 lives lost.

Acute hospital pressures in much of Atlantic Canada

As discussed in the Wednesday newsletter, provinces in Atlantic Canada have all faced restrictions that have restricted travel and social activities throughout the pandemic. Its individual provinces have each had their deadliest months in terms of COVID-19-related loss of life in the past month.

Nova Scotia Health says the logistical challenges are currently significant, as some hospitals in the province are overflowing with patient capacity and at times have not had room for new admissions. Overall system capacity was 104% on Tuesday.

The province has delayed some surgeries and procedures to deal with increased cases in the community and among healthcare workers during the pandemic.

At the Cape Breton Regional Hospital in Sydney, a department was physically relocated inside the hospital to make more space and the entire ambulatory care department was moved to Glace Bay Memorial Hospital. Meanwhile, the emergency room at Strait Richmond Hospital in Cleveland was closed on Monday as it was at capacity, with staffing shortages.

“Moving patients around the area or across the province probably wouldn’t have been something we might have considered so much in the past, but it’s definitely something we had to address,” Brett MacDougall said. , a Nova Scotia Health executive.

In the latest provincial update, 13 people with COVID-19 were reported to have received intensive care treatment, not far from the peak monthly average of 15 per day in May 2021.

New Brunswick weathered the first 18 months of the pandemic averaging no more than 15 COVID-19 patients on any given day, but that number has jumped in the past four months, with an average of 105 hospitalized patients in January. The number currently hospitalized is at a pandemic high of 165, although the province said Thursday that intensive care unit admissions were down slightly, to 14 people.

There are 20 people hospitalized with COVID-19 in Newfoundland and Labrador, including seven in intensive care. The province also reported its 45th coronavirus death from the pandemic.

But conditions are such that the province is moving to a modified version of Alert Level 3 of its tiered system starting Monday, which will ease some restrictions and increase capacity levels in many cases, although still at levels close to 100%.

“We’re all tired of this pandemic and the restrictions, and I can relate, believe me,” she said. “But we have to keep pace. The last thing anyone wants is to have a setback in the last kilometer because we went too fast.”

4 continents overall have had the most deaths per million at any given time.

For complete coverage of how your province or territory is responding to COVID-19, visit your local CBC News site.

To receive this daily newsletter by e-mail, subscribe here.

To see the answers to COVID-19 questions requested by CBC viewers and readers.

Still looking for more information on the pandemic? contact us at [email protected] if you have questions.