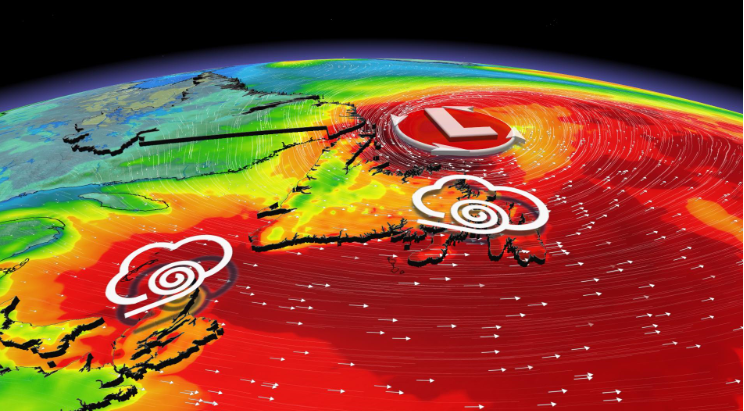 Winds of over 300 km/h will howl over the Atlantic Ocean this weekend, likely fueling the explosive development of a hard-hitting low pressure system over parts of the East Coast this weekend.

A powerful jet stream crossing the North Atlantic Ocean will set the stage for a storm system that could bring high winds, heavy rainfall and possibly even headaches from the sudden pressure drop.

We’ll see this fantastic ribbon of upper-level winds pass from the southeastern United States straight into the heart of the North Atlantic – a jet flying from Atlanta to London would have no trouble arriving on time with a jet stream as robust.

Such intense winds crossing the jet stream create divergent winds aloft. These winds leave a void as they spread, forcing air to rise rapidly from the surface to take its place.

This amount of air pulling upwards creates a center of low air pressure at the surface, which strengthens the longer this configuration stays in place.

That’s the process we’ll see unfold this weekend, and the end result will be a few days of active weather for Atlantic Canada, with Newfoundland finding itself waiting for the worst conditions until early next week.

WATCH: What, exactly, is a weather bomb?

Rainy conditions will begin our Sunday over the Maritimes as the low pressure system begins to develop. The depression will begin to deepen rapidly during the day on Sunday as it crosses the Gulf of St. Lawrence and approaches Newfoundland.

The system will reach its maximum strength on Monday as the center of the low tracks north of the island with minimum pressure equivalent to that of a formidable hurricane.

A pressure drop of 40 mb in 24 hours will easily meet the definition of bombogenesis, or the term used by meteorologists to describe a low pressure system that builds up very quickly in a short time. 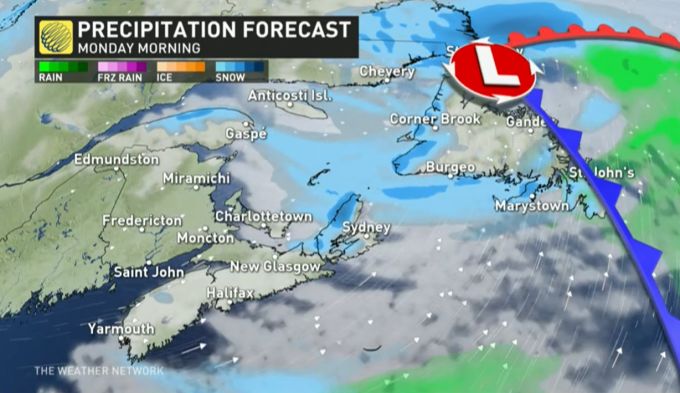 The resulting pressure gradient will bring strong winds to Newfoundland, which could easily exceed 100 km/h at times. Residents across the island, especially along coastal areas, should prepare for localized power outages and secure loose items that could blow away during high winds.

Cold air blowing in the winds behind the low pressure system will also lead to sea effect snow in the Atlantic provinces. Bands of snow are possible in the westerly and northwesterly winds that developed across the region Sunday through Monday. Wind-driven snow could reduce visibility in some places and sometimes make travel difficult.

Stay tuned to The Weather Network for the latest news on conditions in Atlantic Canada.