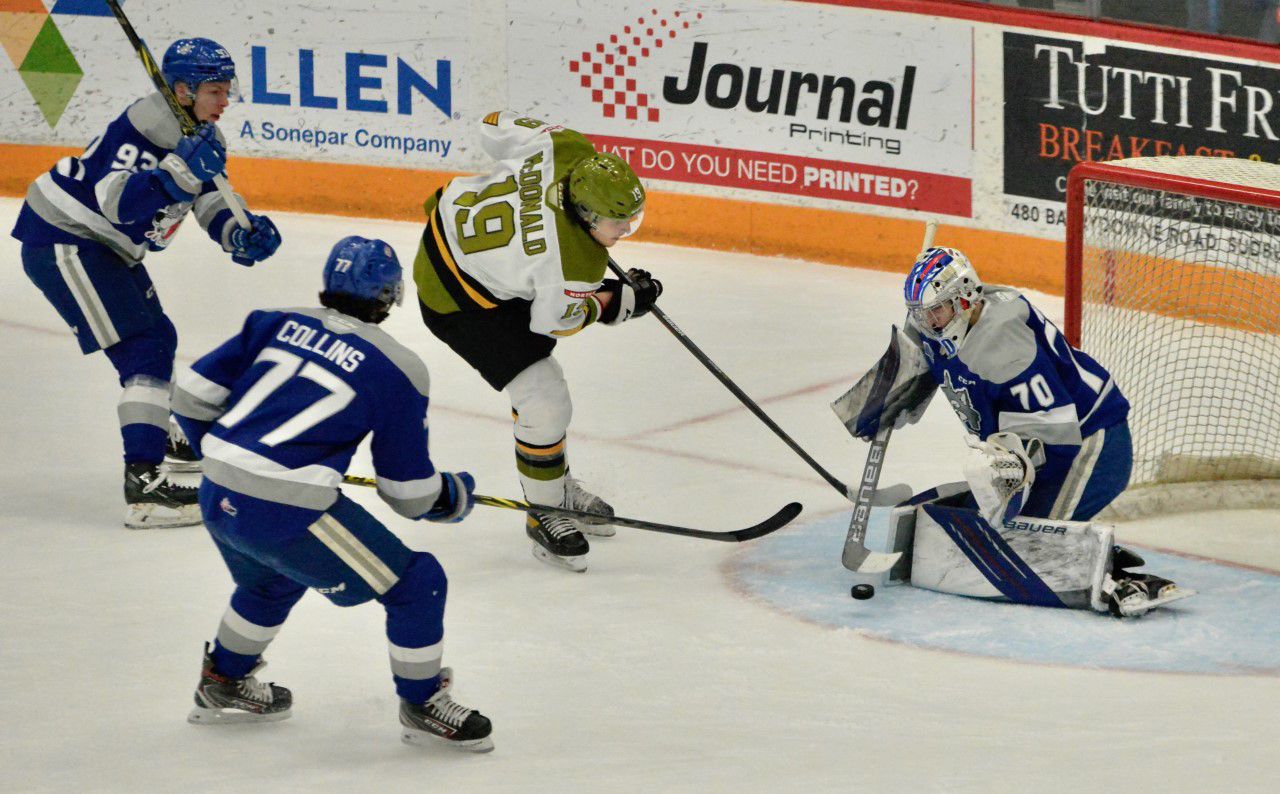 Troops drop Sudbury and prepare to close out regular season

SUDBURY, Ont. – Dalyn Wakely and Liam Arnsby had a goal and an assist each as the North Bay Battalion beat the Sudbury Wolves 3-1 on Friday night, extending their winning streak in the Ontario Hockey League to eight matches.

Grayson Ladd scored the other goal for North Bay, which got 24 saves from goaltender Dom DiVincentiis.

The battalion is posting a won-lost-extended record of 43-18-6 for 92 points atop the Central Division with one game remaining. The points total eclipses the 91 amassed in 2005-06 and is second only to the franchise record of 96 set in 2008-09 when the club was based in Brampton.

The troops, who outfitted 11 forwards and seven defensemen, iced a roster that included Kyle McDonald, returning from a five-game suspension, and Brett Bouchard and Wyatt Kennedy, who played most of the season at lower levels.

Dominik Jenden scored for Sudbury, while goaltender Mitchell Weeks faced 45 shots in front of a crowd of 3,202.

The Wolves, whose discipline plummeted throughout the game, finished their season at 23-38-7 for 53 points, fourth in the division, ninth in the Eastern Conference and out of the playoffs. Sudbury, which played 19, one under, lost a fourth straight game.

After the teams went through a scoreless first period, Wakely tipped home a drive from Arnsby at 4:28 of the second period. Owen Van Steensel also assisted on rookie Wakely’s 19th goal of the season.

With the teams skating four, Ladd beat Weeks on an odd run at 12:15 p.m. for what turned out to be the winner. Owen Outwater assisted on defenseman Ladd’s third goal of the campaign, his second since a trade from the Windsor Spitfires.

Arnsby struck at 19:11, rushing to the right circle for his ninth goal, assisted by Wakely and Van Steensel.

Jendek scored at 2:03 of the final period on a two-man advantage. DiVincentiis and the Troops protested Ethan Larmand hitting the goalie’s glove on the play, but referee Pat Myers ruled Larmand established his position first.

Thursday night, Avery Winslow and Wakely scored second-period goals 26 seconds apart to propel the battalion to a 4-1 verdict against the Oshawa Generals as Ryan Oulahen was credited with his 100th game with the Oshawa Generals. troops.

Matvey Petrov had an empty-netter goal and an assist and Mitchell Russell also scored for North Bay. Goaltender Joe Vrbetic made 32 saves in front of a crowd of 2,464 in the team’s final regular-season home game. The troops went 25-8-1 at Memorial Gardens.

In his 250th career game, Brandon Coe recorded two assists, the first being his 100th point of the campaign, as he joined Justin Brazeau as the only battalion player in the North Bay era to hit triple digits. in one season. Brazeau had a franchise record of 61 goals and 52 assists for 113 points in 2018-19.

Ty Tullio scored the lone goal and goaltender Patrick Leaver faced 31 shots for Oshawa, which hosts the Battalion at 2:05 p.m. Sunday, the last day of the schedule.

BATTALION BALLS: The Battalion went 9-2-1 against the Wolves, including 4-1-1 at the Sudbury Community Arena. The 12-game season streak, based on the covid schedule for 2021-22, was the most in Battalion history… North Bay went 0 for 5 on the power play. Sudbury was 1-2… Wakely had five goals in the last six games… In 11 games against Sudbury, Russell, who was dropped from the scoresheet, had five goals and 14 assists for 19 points… McDonald was suspended for a check on Chas Sharpe in a March 27 2-1 road win over the Mississauga Steelheads… Petrov saw the end of a five-game point streak in which he collected five goals and three assists for eight points. In 11 games against Sudbury, he had four goals and eight assists for 12 points…Battalion captain Arnsby played his 100th game…North Bay was without Winslow, Michael Podolioukh, Coe and Kyle Jackson…Bouchard joined the troops from the U18 Toronto Jr. Canadiens, while Kennedy arrived from the Central Canada Hockey League’s Rockland Junior A Nationals…Among the Sudbury forfeits were Alex Pharand, Dylan Robinson and Quentin Musty…Ryan Harrison was the other umpire .