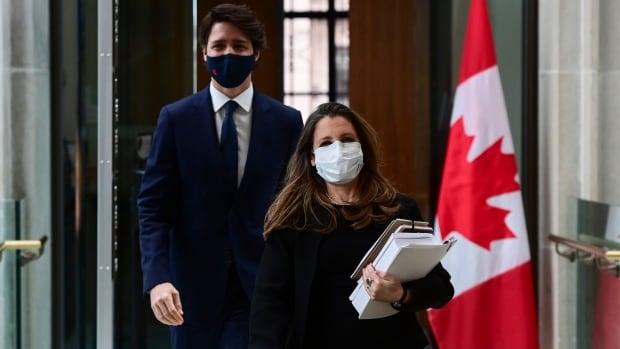 Prime Minister Justin Trudeau will announce his new cabinet at some point in October. But he has already made it clear that the number two post in his government is not up for grabs.

“I asked Chrystia Freeland to continue being Deputy Prime Minister and our Minister of Finance, and she accepted,” Trudeau announced last week in his first extended press conference since the election.

Choosing Freeland to stay in those two roles is a no-brainer, given the importance of continuity on the fiscal and economic fronts as the country continues to navigate its way through the pandemic.

But choosing Freeland was also the easy part. Trudeau will have to rebuild the rest of his cabinet while missing a few key pieces. And her commitment to a gender balanced cabinet will be tested by the loss of four women ministers and the need for new regional representation for Nova Scotia and Alberta.

“I will seek, as I always do, to ensure that there is an appropriate regional distribution. That there is a range of skills and diversity around the table, ”Trudeau said outside an immunization clinic in Kanata, Ont. “But it’s a basic starting point that we have gender parity in all the cabinets that I have set up.”

Trudeau will have to get to that “basic starting point” without Catherine McKenna – who left politics before the election – and Bernadette Jordan, Maryam Monsef and Deb Schulte, all of whom were defeated on election night.

But replacing them may not be as simple as promoting four women parliamentarians into these roles.

Take, for example, the loss of Jordan as Minister of Fisheries and Nova Scotia representative to the Cabinet table. On paper, it looks like newly-elected Halifax West MP Lena Metlege Diab – a former provincial cabinet minister – would be an easy replacement.

But that would once again mean overriding Central Nova MP Sean Fraser, a popular parliamentary secretary who was overlooked in 2019 to make Jordan the first female federal cabinet minister in Nova Scotia history.

Added to this challenge is the fact that Jordan was the only female minister in the Atlantic region. This could open the door to Nova Scotia or New Brunswick – the two largest Atlantic provinces – each having more than one minister. This option would put Ginette Petitpas Taylor and Jenica Atwin in the running, as well as Diab.

To complicate matters further, space must be created at the cabinet table for Alberta, where two Liberals – George Chahal in Calgary and Randy Boissonnault in Edmonton – were elected.

There is an argument for allocating cabinet seats from both cities, although Chahal’s prospects may be held back now that he is under investigation by the Office of the Commissioner of Canada Elections for allegedly having falsified his opponent’s election brochures.

So for regional balance to work – and to maintain his commitment to an equal number of men and women – Trudeau might be forced to remove some men from his cabinet or expand it beyond his current 36 ministers. .

There is a solid roster of women parliamentarians to fill the positions of defeated and deceased ministers. Jenna Sudds, economist and former deputy mayor of Ottawa, shone with her presence at Trudeau’s visit to the Kanata clinic.

Sudds’ presence may have been a simple consequence of geography (she is the MP-elect for Kanata-Carleton, where the clinic is located). But as a professional suburban mom, Sudds also embodies a vital part of the liberal electoral base.

With McKenna’s departure, there is room for another minister from the Ottawa region. Some 40 kilometers east of the Sudds constituency, Marie-France Lalonde in Orléans offers Trudeau another option with cabinet experience in several Ontario government portfolios.

Helena Jaczek of Markham-Stouffville is a former provincial minister of health. Jennifer O’Connell of Pickering-Uxbridge and Pam Damoff of Oakville North-Burlington are parliamentary secretaries who have pushed back Conservative efforts to break into the GTA.

Then there are the newcomers. Leah Taylor Roy is a Harvard-trained businesswoman who defeated Leona Alleslev in Aurora-Oak Ridges-Richmond Hill. Rechie Valdez of Mississauga-Streetsville has a background in corporate banking and is the first Filipino woman to be elected to the House of Commons.

Before winning Pontiac, Sophie Chatel worked for the Federal Ministry of Finance on international tax policy, in particular with the OECD on the taxation of digital giants.

A central question hanging over the new cabinet is how much Trudeau will prioritize continuity over change. Freeland remains in place in funding to advance national child care and lead the post-pandemic economic recovery.

But what about the other ministries at the heart of the Liberal agenda? Does the upcoming Glasgow climate change summit mean Jonathan Wilkinson remains in the environment portfolio?

Does Harjit Sajjan survive in defense, a portfolio he held every day Trudeau was prime minister? Or has the accumulation of scandals and allegations of misconduct in the military made its position untenable?

Would Trudeau withdraw Marc Garneau from Foreign Affairs after having already passed through four foreign ministers in six years? Or is it time for some consistency in the role of Canada’s top diplomat?

Does Trudeau risk advancing towards reconciliation by displacing Marc Miller or Carolyn Bennett, or both? Or do Bennett’s pre-election controversies mean his time on the Indigenous file may be over?

Then there is the question of changing course in the health portfolio while riding a fourth wave. Does Patty Hajdu remain Minister of Health for the duration of the pandemic?

And what about promotions for ministers like Mélanie Joly and Marco Mendicino, who played decisive roles in the Quebec and Ontario campaigns for two consecutive elections?

Trudeau and his team are grappling with big questions. We will have the answers at an undetermined date in October.