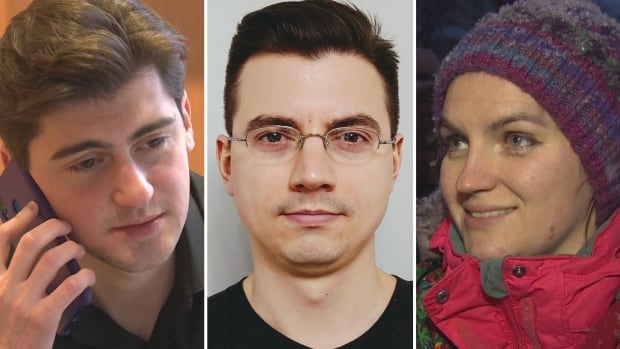 Ukrainian community in Canada on edge as tensions with Russia escalate

As tensions rise between Ukraine and Russia, many members of the Ukrainian community in Canada are watching and worrying about what the crisis means for their home country and their loved ones living there.

Russia has massed around 100,000 troops along its borders with Ukraine, raising fears the Kremlin is preparing to launch a full-scale invasion. Russian President Vladimir Putin denied this and in turn accused the West of following an “aggressive” course “on our doorstep”.

Russia’s demands – that Ukraine never be allowed to join NATO and that other actions, such as the stationing of alliance troops in former Soviet bloc countries, be curtailed – have been rejected by NATO officials. Recent rounds of high-stakes diplomacy produced no breakthrough.

The threat of a possible war is keenly felt across Canada, which is home to about 1.3 million people of Ukrainian descent, according to the 2016 census.

In Waterloo, Ontario, Michael Doroshenko said he worries about his parents and his grandmother, who live in Sumy, Ukraine, about an hour’s drive from the border with Russia.

“It’s been quite nervous for everyone,” said Doroshenko, 30, a Ukrainian citizen who moved to Waterloo Region to study and now works in the tech industry.

He tries to help his family make plans in case an invasion occurs, but says it’s been difficult given the unpredictability of the situation.

“No one knows where he will be safe next week, or two weeks, or two months,” he said.

Varvara Shmygalova, a member of the Ukrainian Canadian community in Toronto, expressed concern about the loss of life that could occur if Russia takes military action. She left the Ukrainian capital, Kyiv, five years ago, but her parents, grandparents and all her friends are still there.

“My message [to them] is: Try to stay as safe as you can, because I love you and I want you to be alive,” she said. “But also, I want you to do everything you can to protect our home country and protect all the values ​​of all democratic nations.”

Prepared for the worst

Artem Pazych, a Ukrainian student newly arrived in Vancouver, is also worried about his family back home and the potential lasting impact on the country if Russia invades.

“Loss of history, loss of identity, loss of culture,” he said.

The 19-year-old is from Zhytomyr, just west of Kyiv. He grew up in the shadow of war in eastern Ukraine, where government forces have been fighting Russian-backed separatists since 2014 – the same year Russia annexed the Crimea region.

Multiple ceasefire attempts have failed and Ukraine estimates that more than 14,000 combatants and civilians have been killed in the conflict. Many more were injured or displaced from their homes.

Pazych said preparing for the worst has become normal.

“My family is informed in their local community: where to go to bomb shelters, what documents to have and what first aid kit do they have,” he said. “And my brothers at school were told what to do in case the war happened, the attack happened.”

Anastasiia Mereshchuk, a member of the Nova Scotia Chapter of the Ukrainian Canadian Congress (UCC), said the situation was “very difficult mentally” for family and friends living in Ukraine, even though they live in Dnipro about 300 kilometers away. west of war. zoned.

“Even though there are no active war actions in our area, it’s still troublesome,” Mereshchuk told CBC Radio. Main Street in Halifax, saying soldiers pass by frequently and area hospitals have treated many injured.

“It’s very real there, and everyone is affected, no matter where they are, no matter what they’re doing in Ukraine.”

LISTEN | Anastasiia Mereshchuk on her concern for her relatives in Ukraine:

On the border between Ukraine and Russia, tensions have been escalating for several months. Many Ukrainian Canadians fear that the situation is getting worse and they worry about their family and friends. Listen to Mainstreet’s Alex Guye speak with Anastasiia Mereshchuk, member of the Nova Scotia Chapter of the Ukrainian Canadian Congress. She has not been able to visit her family in Ukraine for more than three years. 5:13

Vitaliy Milentyev, president of the Alberta-Ukrainian Chamber of Commerce, said the situation was the most heated he had seen in nearly eight years since the fighting began. He said it’s have an impact on the Ukrainian economy.

“Aggression and all this tension are slowing down the country’s economic growth. Investments are not flowing in, people are extremely cautious when dealing with Ukraine,” he said.

“That in itself is detrimental, just as much as all this nervousness around the country on the military side.”

WATCH | Edmonton woman calls on Canada to “do everything possible” to help Ukraine:

The escalation of tensions on the Ukrainian-Russian border is observed at home. Edmonton’s Yulianna Voloshyna has family in Ukraine and she talks to CBC News Network’s Andrew Nichols. 6:37

“We want to raise awareness”

Amid the tensions, there has been a growing movement calling for support from the Canadian government and other Canadians.

In Winnipeg, about fifty people gathered in a cemetery Sunday to show solidarity with Ukraine. The rally was organized by UCC’s Manitoba Chapter as part of the national organization’s #StandWithUkraine campaign.

Among those protesters was Yevgeniya Tatarenko, whose mother lives in Novomykolaivka, in southeastern Ukraine. If the situation gets worse, Tatarenko does not rule out trying to bring his mother to Canada as a refugee.

“We want to raise awareness around the world and we want to draw attention to the political power of Canada and the people who can make decisions on a global level,” Tatarenko said.

Accelerating a NATO membership action plan for Ukraine is one of a handful of steps the UCC is pushing the Canadian government to take.

The UCC also calls for increased sanctions against Russia; the cancellation of the Nord Stream 2 pipeline; military equipment and defensive weapons for Ukraine; and the extension and expansion of Canada’s military training mission in Ukraine, known as Operation Unifier.

LISTEN | A Canadian in Kiev talks about preparing for war, and more about the crisis:

Ukrainian MP Volodymyr Ariev discusses a possible Russian invasion of his country, a Canadian in Kiev talks about preparing for war, and CBC’s Murray Brewster explains what could happen if Russia invades again. 13:45

Ihor Michalchyshyn, executive director and chief executive of the UCC, said Monday in Ottawa that Canada must send a strong message to Putin.

“We have seen the UK, the US, NATO allies, G7 allies sending defensive weapons to Ukraine that will help them defend themselves in the event of an invasion. And we believe very strongly that Canada must join this list very quickly. ,” he said.

Last week, Global Affairs Canada announced that the government had offered Ukraine a loan of up to $120 million “to support the country’s economic resilience and governance reforms.”