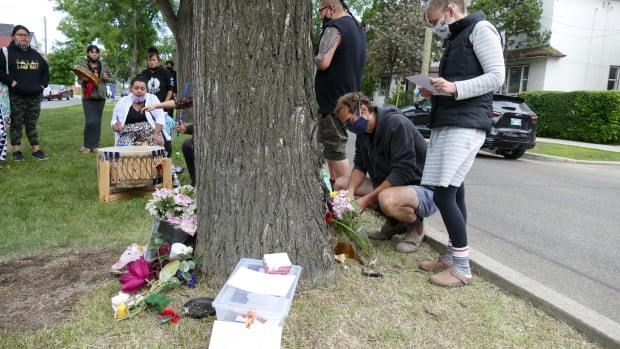 
About 25 people marched to a makeshift roadside memorial on Sunday afternoon to pay their respects to a 12-year-old boy killed in a violent altercation in north-central Winnipeg.

Teddy bears and flowers were left on a tree in the middle of Burrows Avenue, not far from where the boy was stabbed on Friday night. A note encouraged people to light a candle in memory of the boy.

The vigil saw those gathered paying their respects to the boy as traditional indigenous drums and songs filled the air. They refused to speak to the media.

Police did not provide any update on Sunday on their investigation into the stabbings, which they say contain “exceptionally disturbing” details. Neither the arrests nor the charges were announced.

Two groups had an altercation and the boy was stabbed. A nurse on leave who police described as a Good Samaritan helped police take care of the boy until an ambulance arrived. The boy was rushed to hospital, where he died.

We do not know if the groups knew each other.