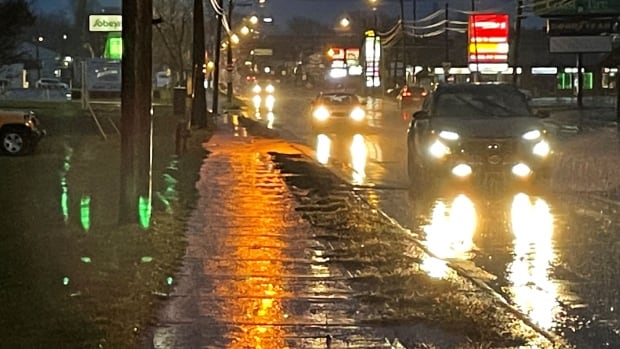 It was a rainy night in central and western Prince Edward Island, and there could be some mixed snow before the storm passed.

An Environment Canada rain warning remains in effect for all of PEI.

Early Tuesday morning, temperatures varied widely on the island, around 5 Â° C in Prince and Queens counties, but 12 Â° C in parts of Kings.

“That’s where the front is,” CBC meteorologist Tina Simpkin said, adding that the end of the storm will depend on where you stand in relation to that storm front.

“Throughout the morning the rain will be quite heavy in the east and start to diminish in the west.”

No more rain for the weekend

But the rain mostly falls in the west, with only five to 10 millimeters more expected. Falling temperatures could turn this into snow, however, and it could add up to a few centimeters.

Kings County could see another 25 millimeters of rain Tuesday morning.

More rain is on the way, Simpkin said. There is a possibility of sunny breaks on Wednesday, but wet weather will return Thursday and Friday.

Prince Edward Island avoided a wind warning with the storm. Traffic is normal on the Confederation Bridge and ferry crossings to Nova Scotia will resume at 9:30 a.m.