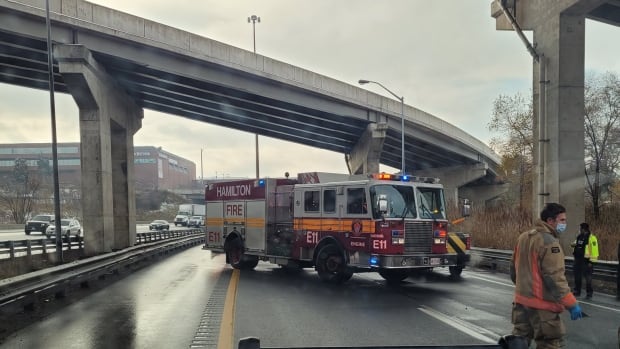 All westbound lanes of Highway 403 are closed on Main Street in Hamilton for an OPP investigation.

Police have shared few details at this point, but said drivers should expect an “extended shutdown”.

OPP Const. Kevin Westhead provided an update on a cluster of crashes in the area on Tuesday afternoon.

In a video posted on TwitterWesthead said he was at the scene of a separate collision involving commercial vehicles at the southbound ramp connecting Freeway 6 to 403.

This ramp is “completely closed,” he said, adding that the investigation into what happened near Main Street was ongoing.

“There are only major collisions right now and delays in this area,” he said.

“Please, as you head into this area, proceed with safety and caution even if it starts to dry up, collisions will unfortunately continue to happen as the drivers are just not paying attention. “

All westbound traffic is diverted onto Main Street, according to the OPP.

King Street West lanes were also closed for part of Tuesday between Dundurn Street North and Macklin Street North as a result of the investigation, but they reopened around 2:30 p.m.